Our third appearance on Streatham Common. Mostly sunny day, which brought loads of people to the event. I've said it before, but what I really like about this Kite Day is the community atmosphere. More than on any other kite festival we fly at do you get people walking up to you, asking questions about your flying, your kites, or kites in general.

Wind was typically Streatham: varying between 2 and 15+mph, extremely variable, gritty, bumpy and full of holes. Basically, you could be certain that, whatever kite you picked, it would be the wrong one most of the time. We went for standards, and that turned out to be the right call. Or, I should say, the least wrong call ...

Like our previous Streatham attendances, we flew three sets of two routines. Well, we flew one more routine, but more on that later. During our first set, we really struggled with the wind conditions, and Irma flew into a hole, which meant she could do nothing more than see the kite slowly drift to the ground. Second and third set went better, mostly because we were anticipating the conditions better. We've certainly flown better, but given the circumstances, it wasn't too bad. 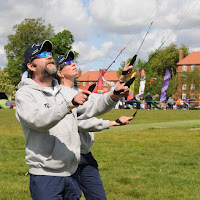 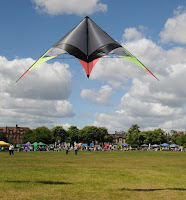 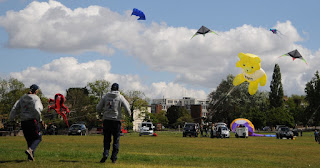 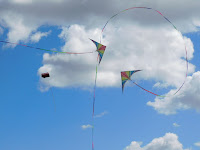 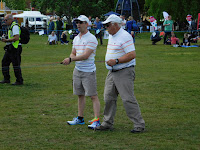 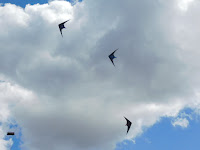 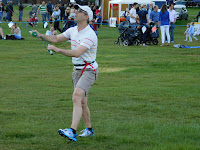 And just in case you haven't noticed, here a close-up of Carl's new shoes in full action: 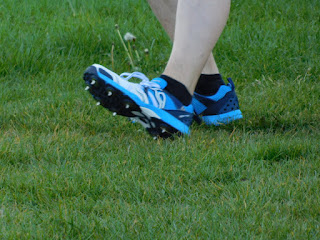 I said we did one more routine, didn't I? Here's the story behind that one ... Zack de Santos, who we first met at Streatham two years ago, is trying to build up a group of London-based kite flyers, with the ultimate aim of getting into team-flying. Earlier this year, he came to Stokes Bay for a day of team-flying with L-katz. Since then, he's been building a set of Sixth Sense kites, to be used by the London group. When I asked him a few weeks ago whether he was coming to Streatham, I suggested he bring three Sixth Senses, with the aim of letting him join Flying Fish in an impromptu display, and so give him his first experience of flying in the arena at a kite festival. Zack indeed brought his Sixth Senses, so the game was on! 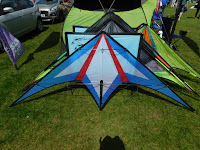 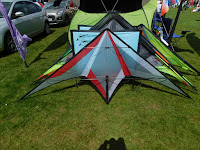 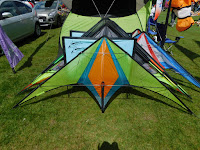 Zack really got a baptism of wind in the very challenging conditions, but he held it together, and managed to get out of a few tricky situations without causing a crash. Well done, Zack! Talking of tricky situations, I had to face one myself midway through our 3-(wo)man scratch display .... all of a sudden, the kite I was flying seemed to implode. I half-felt, half-heard something snap and immediately the kite lost its shape and became really hard to fly. At the time, I didn't know what broke, but something definitely did! The moment it happened I remembered Chris Goff flying at Portsmouth with a broken leading edge. Don't get me wrong; as a mere mortal, I'm not trying to compare myself to Chris, but I did make a snap decision to try and keep flying, and see whether I could complete the display. And yes, I could, and I was pretty chuffed about it. A video of most of the "Flying Fish ft Zack" display (credit: Zack's mother), can be found here; see if you can spot when my kite breaks ... By the way, if you're wondering what actually happened, one of the lower spreaders half-snapped close to the t-piece ...

More pictures of the day are here, though I didn't really have time to take many pictures. Besides flying ourselves, and crewing for Team Spectrum, we also did three interviews. One for a 2nd year student doing a project for her BA in Film and Television: 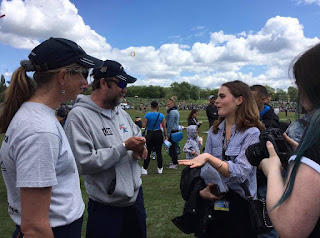 And two for local media, one of which, from SWLondoner, is here (we're about 55 seconds in):


Photo credit of us flying: Carl Wright (Team Spectrum); of us being interviewed for a BA project: Neil Lover
Posted by flyingfish at 21:04