For several reasons, we didn't do much pair/team-flying the last few weeks, but we did do something we'd never done before: indoor flying! Karl & Sara Longbottom had invited us to join them for an indoor single-line kiting session at the St Joseph's Catholic College in Swindon. As we'd never flown kites indoor before, that sounded like fun to try, and a good opportunity to fly the few glider kites we have under the conditions they were really designed to fly in.

So how did our first ever indoor kite-flying session go? First of all, it was fun! And much more different from 'flying outside without wind' than we thought it would be. 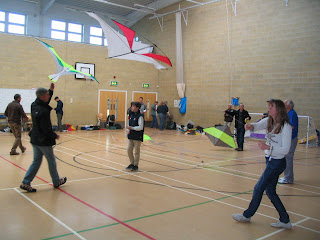 So, first of all, we flew our own gliders (a Flying Wings Wala, two Prism Zero-Gs, and of course our new Longbottom Pterodactyls). 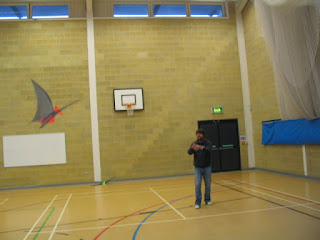 Fortunately, we were also able to borrow some other gliders to try out, such as a Flying Wings Emong, iFlites (made by Patrick Tan in Singapore), and several more Longbottom kites (large Pterodactyl and 6-81). Especially the two iFlites we flew (iFlite and iFlite II) were so light that they just floated on the air. 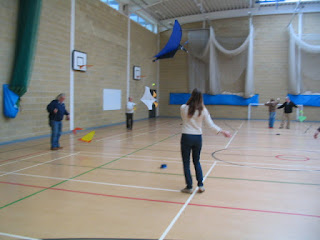 And one glider isn't necessarily the same as another glider. For instance, flying an Emong asked for quite a different technique than flying a Zero-G, which reacted differently again compared to the Pterodactyls (and the large Pterodactyl flew differently from the smaller ones, which is probably not too surprising). Knowing when to give the kite line, when to haul line in to make it turn at the right moment and not hit the floor, when to walk backwards, etc. We still have a lot to learn about indoor kite-flying. Sara mentioned another session in January: we'll be there!
Posted by flyingfish at 20:07