Spring 2017 isn't even two weeks old yet, and we already had our first kite festival of the year! The organisers of Minchinhampton Kite Day are keen to expand their annual event, and invited a number of dual-line teams to come and fly there, in a proper arena. Flying Fish was glad to be among them.

We arrived with Minchinhampton Common basking in sunshine, and under a decent breeze. Keen to have our VampDevil quads be part of our displays, we quickly got them out for a spin, and they flew fine in the smooth morning breeze. 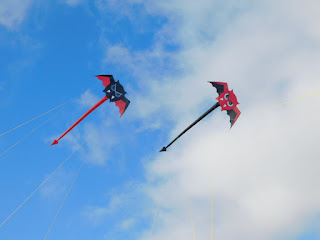 Unfortunately, this nice breeze wasn't going to last; more on that later ...

Besides Flying Fish, there were team performances by the Airheads, flying as a pair in the morning, and as a 3-(wo)man team in the afternoon. 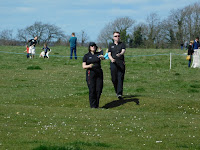 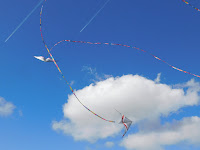 The reigning UK pairs and team champions, Phoenix and Flame, respectively, were present to fly their internationally acclaimed routines. 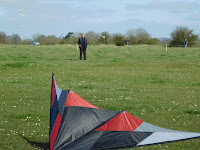 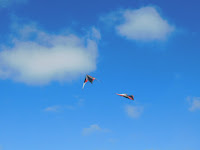 Is one man flying three kites a team? Whether or not, Dave Green flew three kites in the morning, and two in the afternoon. 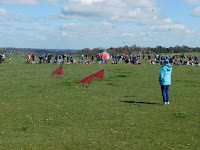 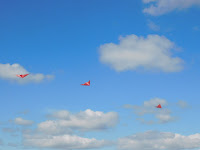 Definitely not a team, but performing his solo Rev routine: Les Storey. 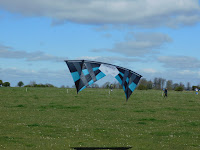 Back to Flying Fish: what did we do? As I mentioned above, the nice morning breeze quickly started to drop away. Like the other teams, we struggled with this rapidly decreasing wind, which meant we couldn't fly our VampDevil routine. It was down to T5 Taipan UL at first, and T5 Cubans later. First time we flew our updated 'Chariots of Fire' routine in public, and unfortunately, the wind dropping to almost nothing at times meant we couldn't fly them as well as we'd wanted ..... 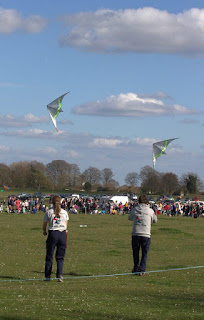 We also flew our pair of Trilobites for their official festival debut. Once launched, they flew fine in the light winds. 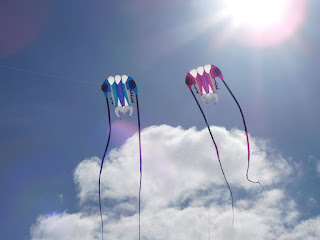 Quite some time in the programme for mega-teams, and we flew with the other team flyers in varying compositions, and with between four and eight kites in the air. 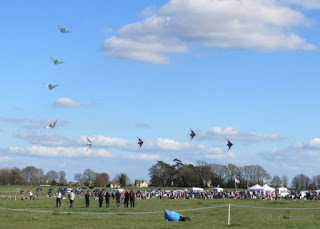 The final arena display of the day was an 8-(wo)man mega-team, combining Flame, Airheads and Flying Fish:


As we were flying (or crewing) so much, I hardly had time to take pictures, but a few more can be found here. A great opening of the 2017 kite festival season for us; if they want us back next year, we will be!

But not only did we leave with good memories of the start of the season, we also left with something very special ... A little girl had seen us fly, and had made a drawing for us. She handed it to the organiser, asking for it to be passed on to us, and then rushed off. So, sadly, we never met her. Look at the drawing: she put a lot of detail in it: the clouds over the Common, lots of public, us flying as a couple. And she has looked carefully at our Cuban kites and really succeeded in capturing their panel design. We really must have struck a chord with her. As we didn't get the chance to talk to her and thank her, we don't know whether she has a kite or not. If nor, maybe we lit a spark, and I do hope in that case that her parents will get her a kite (or two, or three) to fan that spark into a life-long passion. Wouldn't it be great if in 10-15 years time a young woman called Violet becomes UK National Champion, and the seed of that was sown at Minchinhampton Kite Day 2017?

For us, getting something like this from a member of the public is really special, and we will treasure Violet's drawing as a cherished memory. Violet, if you or your parents see this, please do get in touch.


Credit for the picture of us flying: David Joyce; of the mega-team: Sharon Savell; video credit: Marianna Dimakopoulos; drawing credit: Violet
Posted by flyingfish at 18:47