Our third consecutive appearance at Exmouth, and it was a good one! Weather was a mixture of clouds and sunshine, dry, and with decent winds (stronger on Saturday than on Sunday).

Besides Flying Fish, two other teams flew their routines in the arena. First of all, the Airheads flew as a 3-man team: 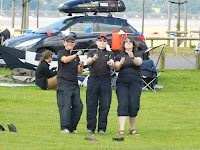 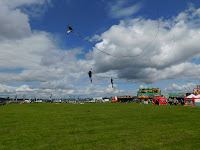 And The Decorators flew as a 6-man team: 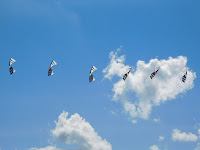 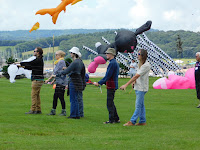 As Flying Fish, we flew a total of six routines, five of which were different! Never flown so many different routines at a single festival. With out T5 Taipans, we flew our 'Chariots of Fire' routine twice, and 'Adiemus' and 'Ruthless Queen' each once. On Saturday, we used our Standards and V1s; on Sunday our Ultralights and Standards. 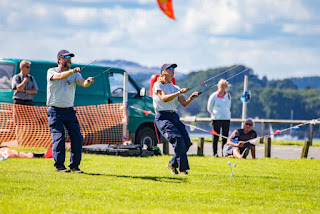 And then we flew our Peter Powells to 'Heart of Courage' on Saturday. The wind was just enough to fly them properly, and the low speed they flew actually matched the music pretty well. 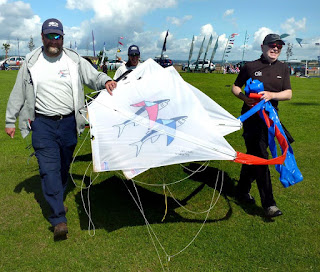 And we flew our VampDevils to 'Thriller' on Sunday. Again, the wind was on the light side for them, but they kept flying throughout the routine. 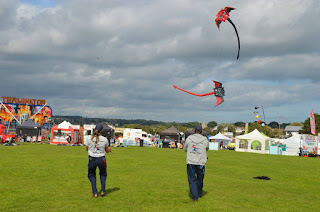 Besides flying as a pair, we also teamed up with the Airheads, under the name of Fish Heads, or Airfish, or Fish(y) Tails, or Prawn Sandwich, or Fish Fingers. And I possibly forgot one or two now; Paul Reynolds was coining them faster than I could remember them!

Sticking to Fish Heads for now, we flew another six routines as a combined team; two as a 6-man team, without tails, and four as a 5-man team, with tails. One hairy moment occurred when as a 5-man team we flew T5 Standards and the wind really picked up, but we got through it without any breakage and without getting tails tangled. 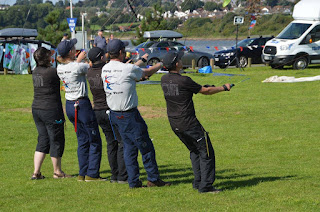 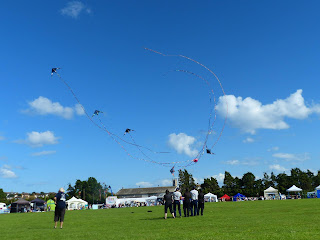 Lots more pictures of the festival are here, including Paul Reynolds and David Ellison providing commentary from The Terminator ... 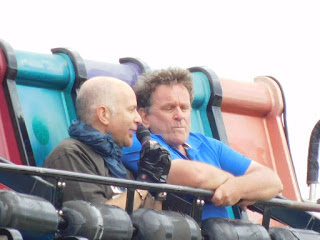 Picture credits of us flying, in order of appearance in this post: Bridget Batchelor Design and Photography, Alan Pinnock, Franca Perletti (2), Marian Linford
Posted by flyingfish at 12:15