All Hawaiians, great and small

A couple of weeks ago, Roger showed us the latest addition to his quiver: a kite he picked up from a shop for little more than a tenner, and which appeared to be a Chinese-made copy of a Hawaiian. Except, it was much smaller, with a wing span of just over 1.70m (compared to 2.44m for a real Hawaiian). We promptly dubbed the kite a 'Babywaiian' and decided we just had to fly it together with our full-size Hawaiian one day (the wind was too light then for a full-size Hawaiian). 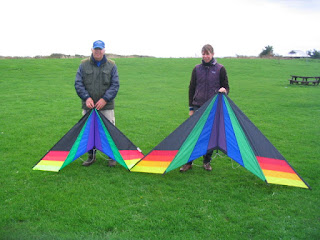 Last weekend, the wind was suitable for flying a full-size Hawaiian, and here's the 'Babywaiian' next to its larger sibling!

We managed to fly some basic patterns (such as infinities, boxes, and threads), even though the 'Babywaiian' clearly had less drive than the full-size Hawaiian, and constantly had to cut corners to catch up. Part of the problem is likely to be the lack of an upper spreader on the 'Babywaiian'. Of course, that's easily remedied, and will make the frame a bit stiffer, such that it loses less wind energy due to flexing of the frame. 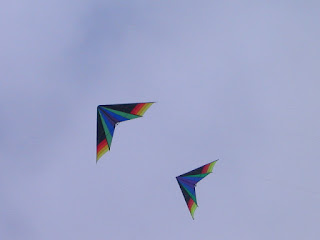 Here's a brief video, trying to capture the two flying together. In the end, we made a few attempts to refuel, but, as you can see for yourself, that didn't work out too well ....

In all, this was just a bit of fun, and not meant to be a serious addition to our team repertoire. Not that flying team shouldn't be fun, but you know what I mean.