As many of you know, Peter Powell brought dual-line kites to the public, but the PP certainly wasn't the first dual-line kite. Among the earlier dualies was one iconic one: the Garber Target Kite, dating from the 1940s. 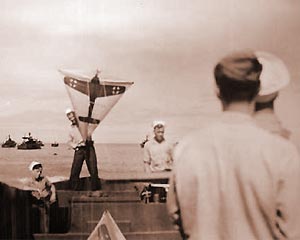 This kite was used in the second World War, and designed to be flown from ships, with the aim of training gunners to bring down enemy airplanes. 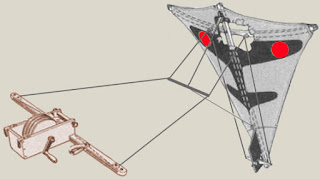 It was steered by two lines, which were connected to a rudder system. Anyone interested can find lots more information on the history of these Target Kites here.

Being interested in the history of kites, as well as flying them, I've been playing with the idea of building myself a modern replica for quite a while, and earlier this year, I decided to take on this project. With one added twist: to build two of these kites, with the ultimate aim of flying them in a pair routine.

I didn't want to build an exact replica, because that would involve wooden spars, metal nuts and bolts, and heavy cloth, and would make the kite very heavy. Remember, these kites were meant to be flown from moving ships, so would have lots of wind almost by default. Instead, my aim was to build two target kites from modern material (ripstop, carbon, etc), so that they would fly in 'normal' wind. So call it a modern interpretation rather than a true reconstruction. Searching the internet for plans for such kites resulted in exactly zilch ....

OK, plan B was to do everything from scratch, which was a bit daunting, as my kite-building experience is quite limited (I've build a Wazo, and a modern interpretation of a 19th century dual-line rescue kite). Anyone interested in details of the building process so far can find some photos here; I will keep updating that web-album as the project proceeds.

The building process has now arrived at a stage where the first of the two kites (dubbed Target:Z, where the 'Z' stands for 'Zero' the name of the Japanese plane that is portrayed as a silhouette on the kite) is ready for its first test flight! This is still without the rudder system, as I wanted to try out first whether the kite would fly at all, was balanced, etc, before even thinking of how to implement the rudder system (which I'm still not 100% sure about!).

Moment of truth: Stoney Cross plain, on a sunny Saturday morning. Kite is attached to the lines. What's going to happen when I pull on the lines??? 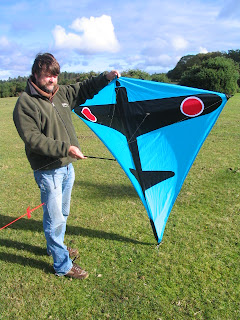 Well, the kite flew, and it actually flew pretty well! Slow to rise, but quite stable. So balance and bridling is ok. The steering needed a lot of input, but it can fly circles. 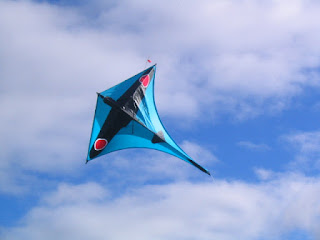 Two problems though: first of all, the frame is too flexible. Even though the wind was light (5-10mph), it flexed quite a lot. Second is that the sail showed way too much billow. Here's a short video of the first test flight, which illustrates the major faults.


Solution is quite simple: frame is currently 6mm, so if I replace that with an 8mm frame, it should reduce the flexing. And if I make that frame just a but bigger than the current one, it should stretch the sail more, and so reduce the billow. As I write this, my order for 8mm spars and other bits and bobs is already in the hands of The Highwaymen.

In all, I'm actually pretty pleased with the project so far, and given that I have little kite-building experience and had no plans whatsoever, it would have been a miracle if I'd gotten everything right in the first go. And while I'm awaiting the spars and other bits for the new frame, I can start building the sail for the second of the pair of Target Kites, which will show the silhouette of a German Focke-Wulf plane. Watch this space!
Posted by flyingfish at 17:23