Flying a stack of kites is just fun. Pure and simple. We've got a 5-stack of Prism Microns, which never fails to put a smile on my face when I fly it. You can't trick the stack (well, I did try to axel it one day, and that resulted in a tangled heap of bridle lines, connector lines, and tails), but flying it is Simply. Unadulterated. Fun. 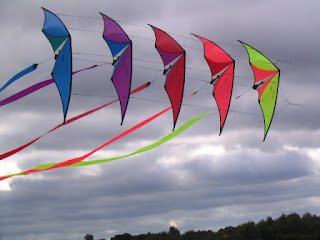 At the other size extreme from the Microns, I recently stacked our HQ Little Beast with our HQ The Beast II, to create a "BeaSTack". 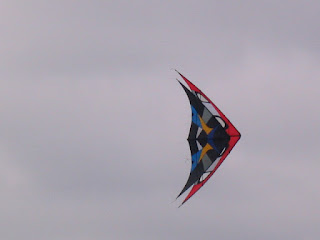 On their own, both kites can pull when the wind picks up, but together they PULL! 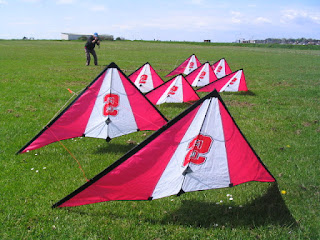 What's all this got to do with pair/team flying? Nothing so far, but bear with me, I'm getting to that! Earlier this year, Neil brought a stack of three smallish red-and-white kites to Stokes Bay. We all flew the stack, and it didn't fly bad at all. Tracking well, and with reasonable cornering. Neil then mentioned that he actually had 10 or these kites, and we wondered whether we couldn't create four or five stacks of two, and fly them with the team.

Besides the possibility of flying these stacks with the team, I was also curious where these kites came from. To me, they very much looked like something from an American college. Turned out that I wasn't far off the mark, and when I showed a picture to an American friend of mine, he recognised the letters 'NCS' as belonging to North Carolina State University. How they got from North Carolina to the UK is anyone's guess ...

While I was trying to get to the bottom of the origin of these kites, Neil and Tony sorted out the kites themselves and the bridling. And a few weeks later, L-katz was flying their routine with "Carolina Stacks"! 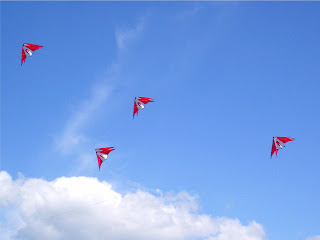 We've so far only flown them once with L-katz, possibly because we got a bit 'distracted' flying the North Shores we got on loan from STACK .... As an aside, I also flew all 10 of these kites in a single stack, which was a real upper-body workout! 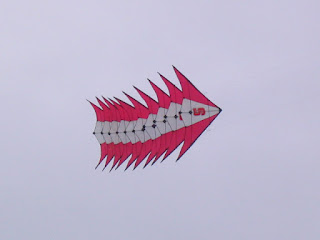 If you want to see what happened to Neil when he flew the stack in a strong gusty wind, click here!

Back to team-flying, since flying the "Carolina Stacks", Irma and I also flew Warp 9 triple-stacks in a team setting. 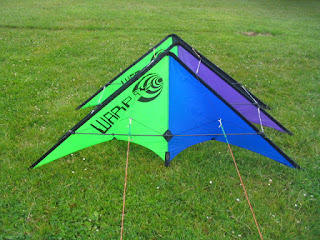 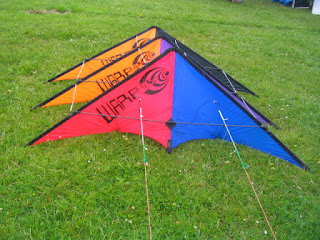 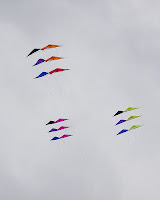 This was done together with Barry and Fran (of Team Flame) at the Southampton Kite Festival.

I don't expect that flying stacks will be a major aspect of the flying by either Flying Fish or L-katz, but having the "Carolina Stacks" does add something different to our portfolio which we can occasionally dip into. Just for fun, of course!

Pictures of L-katz flying the "Carolina Stacks" and us flying the Warp 9 stacks taken by Roger
Posted by flyingfish at 18:53