We have now flown our first public routines at the Southampton Kite Festival last weekend, both as Flying Fish and as part of L-katz. But roughly three and a half years ago, we’d never even flown a dual-line kite! So how did we get to into kite-flying in general, and pair/team-flying specifically? The way I see things, there were three significant steps in the road to flying at a Festival, the first of which was getting our first dual-line kite.

Sometime during the Xmas holidays of 2008, I thought it might be nice to get ourselves a dual-line delta kite. We have Southampton Common, a large open park space, close to where we live, so wouldn’t it be fun to have a kite, and fly that there when the weather is nice? Did some research on the web, and given that I didn’t want to spend too much money on something I didn’t know I’d like, I decided on an HQ Yukon. Not expensive, but still getting good reviews as a kite that’s suitable for beginners to learn the basics on. Kite (in the ‘Cool’ colour scheme) was ordered and duly arrived, and off to Southampton Common we went in early January 2009. 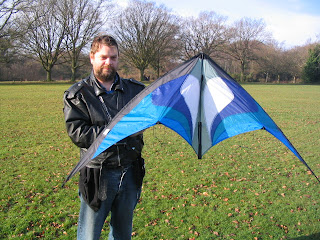 Yukon was put together following the instructions, lines were laid out, and, after checking the instructions again, attached to the kite with this funny larkshead knot. Now remember that the only kite-flying experience we had was as kids, flying a cheapo single-line wood-and-plastic contraption that wouldn’t fly properly and crashed to pieces very quickly. So neither of us had ever flown a dual-line kite. OK, the moment of truth was there, with me holding the straps, and Irma standing behind the kite. Pull, launch, crash. Hm … Irma, can you put the kite back on its wing tips? Pull, launch, crash. Hm again .... Irma, can you put the kite back on its wing tips? Pull, launch, crash. Hm x 3 … Irma? Well, you get the picture ... This went on for a few more times. Every time the kite left the ground, it turned to the right and nose-dived to the ground (or ‘lawn-darted’ as we were to learn to call this later). Irma was starting to regard flying kites as maybe not a lot of fun … And then it happened: pull, launch, fly!! Kite went up and stayed up! Steered it a bit to the left, bit to the right, all very careful, but the kite flew and I could control it (well, sort of …)! After flying the kite to the edge of the wind and letting it drop to the ground, it was Irma’s turn. She must have watched my mistakes (i.e. 'playing semaphore', not keeping my hands together) and learned from them, because the kite flew up straightaway, and she could also fly it a bit to the left and a bit to the right. We alternated a few more times, and gained confidence in flying the kite from left to right and back again. This was FUN!!!

But a problem now was that one was flying and the other one standing around, waiting to fly. Easy problem to solve: another HQ kite (Bebop, in the ‘Fire’ colour scheme) was ordered the next day. 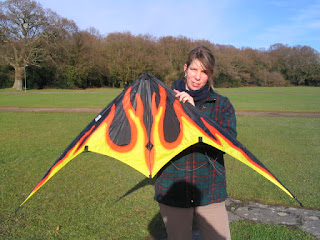 So now we could both fly at the same time, and start to learn the basics of dual-line kite flying. I still remember the first time I decided to try and fly a circle, started the move, and then backed out of it again: too scary! And the moment I persevered and actually flew my first circle!

Many kites on (we're abiding by the golden rule: "the optimum number of kites is one more than current"), we still have our first two kites, and use them to introduce others into the sport. But they do feel like toys to us now! Things have moved on since those early days …
Posted by flyingfish at 10:49