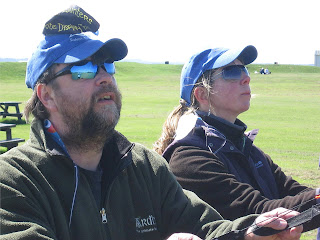 When it became clear late last year that we were going to fly at the Southampton Kite Festival, we had to stop faffing around and get serious with a proper routine. So what do you need for a pairs ballet?

1. Kites - yes, without them it becomes a wee bit challenging. As many kites as you have flyers (so two, in this case), large and precise (we're talking well over 2m wing span, preferably closer to 2.5m), and they ought to be same, set up in exactly the same way, so they react the same and fly at the same speed. Tick that box, we have several pair/team kites, for a range of wind conditions. I'll introduce the kites we have for pair/team-flying in another post.

2. Music - whatever tickles your fancy; you really don't want to fly to music you don't like, as you will hear it ad nauseam during practice. Between 2 and 5 minutes long, and it needs to be suitable for a kite routine. Slowish and flowing is a good start; heavy metal usually doesn't work ...

3. Choreography - the sequence of moves and patterns. 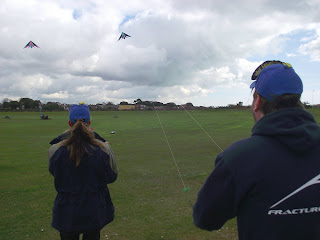 Ideally, the moves and music match up perfectly throughout, but as I had never written a kite routine before, I wanted to start off simple, with the music more forming a backdrop to the kites flying than every move perfectly matched to something in the music. After all, we weren't trying to challenge the Scratch Bunnies, the reigning World Champions, were we? So what we did was take several of the moves we had been practicing so far, and string them together in such a way that it flowed. Couple of new, more daring, moves towards the end, but not too difficult. Better to fly a simpler routine well than make a mess of a more difficult one. Also we had to make sure that the end was flexible, so we could adapt to the wind speed as we were flying. Don't forget, the aim is to land the kites exactly when the music stops!

The music we picked for our first routine was "Ruthless Queen" by Kayak, a Dutch band. This song dates back to the late 1970s, so you may not be familiar with it. In that case, here's a video of the band performing the song:

And no, there are no videos (yet?) of us flying our routine, so until they exist you'll just have to come to the Southampton Kite Festival on June 16 and/or 17, and watch us fly live, won't you?

Credit where credit is due: the pictures in this post were taken by Roger, one of our kiting buddies; thanks!
Posted by flyingfish at 18:49