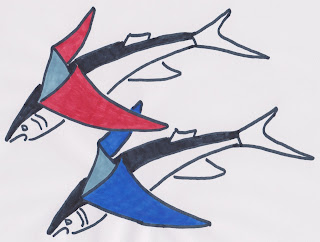 I decided to start a blog. Why? Well, several reasons, actually. First of all, my wife and I seem to belong to a rather rare species in the UK: a dual-line kiting team, or to be more precise, a kiting pair (we're also part of a team, though; more on that later). Second, we're about to become 'grown-up', in the sense of flying at a public event. This will happen on June 16 & 17, at the Southampton Kite Festival. So, as we're the new kids on the block, maybe a good time to establish a web-presence, and let anyone interested know what we're up to in terms of kite-flying. To tell how we got to this point. To talk about what's happening in the world of kite-pair/team-flying. To promote pair/team-flying. And a final reason for starting a blog is simply to see what it is like to maintain one.

Bit more introduction in this first post; more will come in later posts. Flying Fish consists of Lex and Irma, Dutch born and bred, but living and working in the UK for close to 20 years now. We both have busy jobs (Irma as a landscape gardener; Lex as a university lecturer), but try to fly kites during weekends and other days off as much as we can (and the weather allows). We normally fly at Stoney Cross, New Forest, on Saturdays, and Stokes Bay, near Lee-on-the-Solent, on Sundays (together with other members of Solent Kite Flyers, the local kite-flying club that we're members of).

This blog will hopefully grow over the coming weeks and months, and be a mixture of kiting past, kiting present, and kiting yet-to-come ... But I'm going to finish writing this first post now, and see whether I can actually publish it! Here goes (if you read this, it worked ...).
Posted by flyingfish at 20:59