Even though my allegiance is firmly with Star Trek (yes, I'm a Trekkie), when I saw three Star Wars kites on eBay for next to nothing, I knew that resistance would be futile ...

When the kites arrived, I realised why they were so cheap. Pretty flimsy plastic sail, and a frame consisting of two thin fibreglass rods. No in-built dihedral: just a spine and a bowed cross spar, similar to an Indian fighter kite. So we took them to the field to try them out, expecting little more than nothing from these kites ...

First up, a pair of 'Naboo Fighters', with a 69cm wing span and shortish yellow tails. We decided to fly them on proper 25m lines rather than the very stretchy-looking lines they came with. 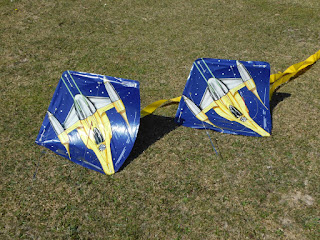 We launched them with trepidation .... It took a little while to get used to them, because they are extremely sensitive to input. Don't move your arms, don't move your hands or even your fingers. You can almost think them into turning; the slightest twist of your upper body is enough already. 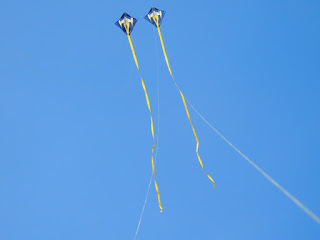 They do need constant wind pressure in the sail (no dihedral, remember), but fly they did and we could fly something resembling follow-on and parallel infinities! 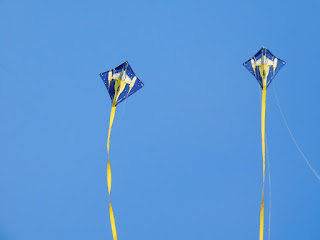 On to the third of the three, a 'Darth Vader' kite, with a wing span of 80cm, and a (slightly longer) red tail. 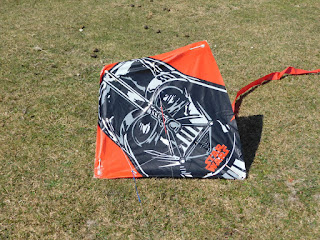 Slightly less sensitive to input than the 'Naboo Fighters', and as we were now used to minimal input, we had no problem flying it. 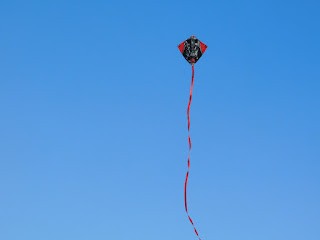 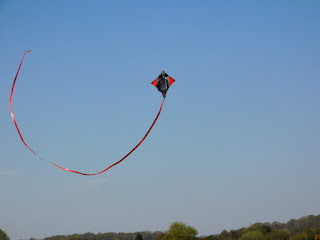 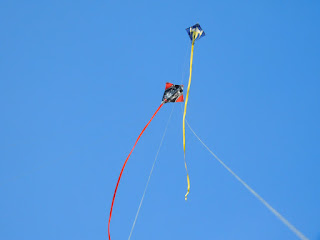 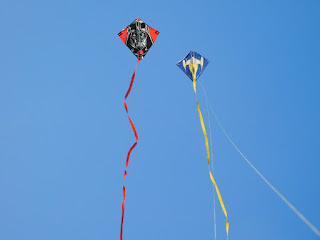 Obviously, we have to fly 'Darth Vader' chasing both 'Naboo Fighters' at one point!
Posted by flyingfish at 08:02