For some reason, the two rainbow Aerobats disappeared behind a cupboard ... I found them again the other day, and this time they were soon going to get flown. 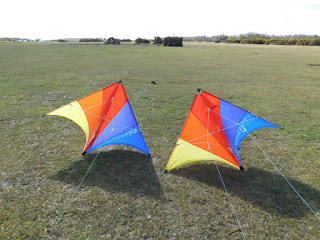 Because of the rainbow colour scheme, they really look cheerful in the sky. We flew them on 30m lines, as we felt that flying kites as small as this (they have a 1.27m wingspan) on our normal 45m lines would make them almost disappear at the end of the lines. 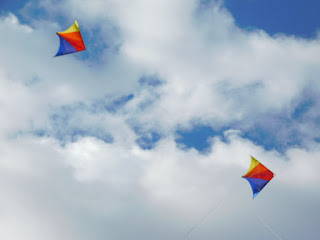 Because these Skynasaurs don't have stand-offs, they really need to rely on the push of the wind in the sail to maintain their 'rogallo' shape. A sudden change in direction (like flying a sharp corner) distorts that shape, and they don't like that. Bring them to the edge of the wind window, and you run the risk of them losing shape completely and just fluttering to the ground. 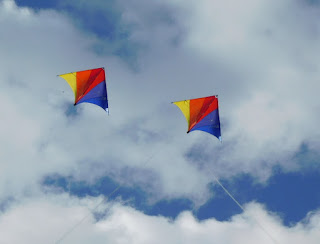 But as long as you fly them at wind speeds well above 10mph, and keep wind pressure in their sails all the time, they're fun to fly!
Posted by flyingfish at 14:10