A quartet of 4-Ds

If you've been following this blog over the years, you may well be aware that, as Flying Fish, we're always on the look-out for kites that are slightly out of the ordinary, to fly at festivals. Whereas we have a wide range of such 'other' kites for intermediate wind ranges, when it comes to really low winds, our options are more limited. We do have a pair of Inner Spaces, though, and recently added a pair of Kaijus to our low-wind pair quiver.

Flying Fish is half of the L-katz team (the other half is our sister pair, Twisted Bridle). And if low-wind options are limited for Flying Fish as a pair, they're even more limited for the team. Basically, as a team, we only have our T5 Cubans for when the wind drops down to almost nothing.

Now it just so happens that Twisted Bridle has a pair of Prism 4-Ds, and we have a single 4-D. Three isn't that far from four, is it? Twisted Bridle's 4-Ds were 'Ruby' and 'Cobalt', whereas ours was 'Amethyst'. Just need one more 4-D, in a different-but-matching colour scheme, and we're done! So we got ourselves another 4-D from Kiteworld, in the new 'Graphite' colour scheme, as that matched the other three best. 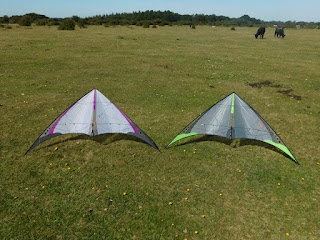 Now we had no idea whether they could even be flown in pair or team formation, so getting that fourth one was a bit of a gamble. First test was with two being flown as a pair. The 15m lines they come with are far too short for any formation flying, of course. We tried 25m and added 5m leaders, and felt that 30m was the right length to fly them as a pair. Long enough to give us space to do things in, but not so long that the small kites (1.47m wing span) struggle in very light winds to pull the lines along.

The main thing you notice when flying 4-Ds as a pair is how twitchy the kites are. This means input has to be really minimal. We flew them with finger straps rather than wrist straps on the lines, and that does help towards keeping input minimal. Once you get used to that, you can basically do anything you would normally do with much larger team kites. Boxes can't be too sharp, or the kites oversteer and wobble. Axels and half-axels are easy, but refuels, on the other hand, are really tricky, because it's difficult to keep the lead kite stable enough for the following kite to 'dock'. 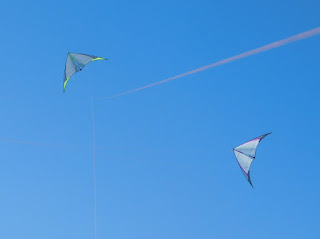 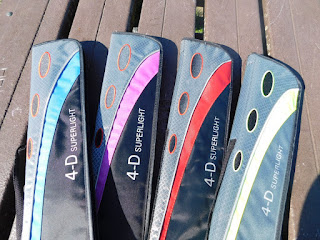 So the next test was to fly all four together. We stuck to 30m lines, and that worked fine in team formation; no need to go any longer. 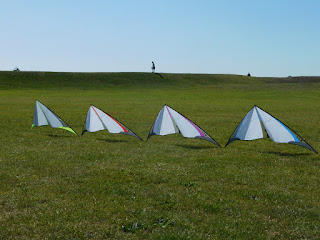 Flying them in a team basically worked as well as flying them in a pair. Minimal input is absolutely key; sometimes you barely need to do more than just think about a move, and the kite will do it. We went through almost all our team patterns, including more complex ones such as jitterbug and quadra dazzle, and they all worked with the 4-Ds. 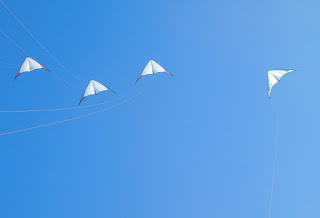 The 'Graphite' having a darker main sail than the other three actually works fine visually, as the 'Graphite' is the lead kite most of the time. And we intent to work more on some patterns where the 'Ruby', 'Amethyst' and 'Cobalt' kites are doing something together, different from the 'Graphite' one.

Of course, 4-Ds aren't designed to be team kites, and they'll never perform nearly as well as our T5s and Impulses. And we will never ever fly them in competition. But they do give us a different option when flying at festivals with the team in very low winds. Coming to a festival near you next year, maybe?
Posted by flyingfish at 09:31