For 2016, STACK introduced two changes to the format of the UK National Championships. First of all, the nationals were to be run over two weekends, giving competitors the opportunity to fly four rounds, the best two of which would count. And secondly, the competition would include a technical routine as well as compulsory figures and a ballet.

After we flew at the Nationals in 2015, the major feedback was that we needed to fly more 'to' the music than 'with' the music. As I wrote about in an earlier blog post, we worked hard since the end of the 2015 festival season on a new ballet, which has Ron Reich's "Chariots of Fire" routine at its heart, but tweaked and changed to suit our own flying style. And completely flown 'to' the music, of course. Going into the 2016 nationals, our primary goal was to increase our scores such that we ended up solidly in the 50s. Or, in other words, improve on our 2015 overall score of 45.3 by around 10 points.

In the run-up to Dunstable, the forecast was for rain all day on Saturday, and no wind. Sunday looked like the better day, with a bit more wind, and less rain. It turned out the forecast was wrong on all counts ... Saturday started off with virtually no wind, but then it picked up to a pretty smooth 3-9mph. And no rain to speak off throughout the day. Sunday was mostly drizzle and rain, with the wind a wee bit stronger (up to 12mph) than Saturday. With no quad-flyers present, and taking advantage of the pretty good conditions on Saturday, we flew both Dunstable rounds on Saturday, for dual-line individual, pairs, and team.

Two competitors in DI: Miguel Pérez Senent (a guest flyer from Spain) and Tony Shiggins. Miguel ended up with the highest scores at the end of the day. 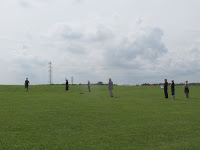 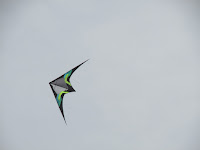 Two pairs flying in DP: Phoenix, the reigning UK champions, and Flying Fish. As was to be expected, Phoenix topped the table after two rounds. 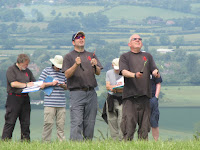 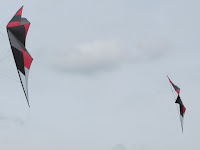 Just one competitor in DT: the current UK champions Flame. As the sole team, they remained unchallenged this round. 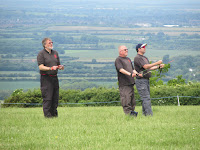 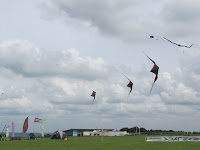 As I mentioned above, there were no quad-flyers, and no multi-kite flyers, so no competitions were run in those categories.

So how did Flying Fish actually do at Dunstable, apart from finishing second to Phoenix? To cut to the chase, we achieved our goal of increasing our overall score by 10 points. No, not true: we overshot that goal. Our overall average over the two rounds was 60.0, improving on last year's overall score by about 15 points! And what's more: we beat Phoenix in four of the six figures ... That means that we had two solid rounds in the bag, and could only improve on that during the northern leg.

As far as I'm aware, no pictures were taken of our flying, but there is something better: one of our two ballets was video-ed:


Videos like this really show where we need to improve!

On Sunday, only one round of freestyle was flown, with a single competitor: Miguel Pérez Senent (who obviously topped the table after Dunstable!) 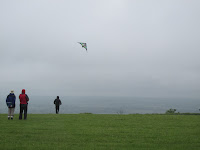 If you want to see the full results of round 1 and round 2, you know where to click.

Obviously, the end of each day was spent mega-teaming. Mixture of mostly ultralight T5 and Fury kites on Saturday; North Shore Radicals and Furies on Sunday.

More pics of the weekend, including some of the Sunday mega-team and one of a (real) red kite flying over, are here.

Souter Lighthouse gave us not only the northernmost site we've ever flown kites on, but also the worst conditions we've so far competed in .... Saturday gave us extremely variable bumpy and lumpy winds (down to 4mph, up to 26mph, and all that within seconds at times) combined with squally showers all through the day; Sunday winds were only a tad less extreme, but at least it remained dry. With winds like that, you could be sure that whatever kite you opted for, it would be the wrong one ... Still, you've got to deal with what you're presented with, and we tried to make the best of it. 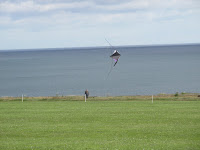 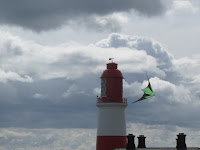 One competitor in MI: Josh Mitcheson, who obviously topped the table at the end of Sunday. 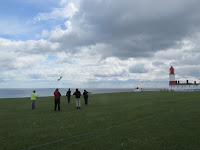 On to pairs; Phoenix and Flying Fish flew in DP, with Phoenix getting the higher scores over the weekend. 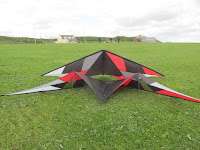 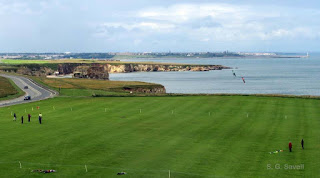 MP saw a new pair entering competition: Amalgamation, consisting of Josh Mitcheson and Tom Greenfield. As the only entry in this category, they obviously scored highest. 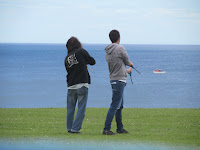 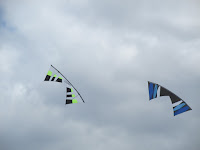 DT had only one entry: Flame was unopposed during the weekend. 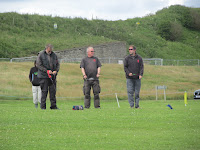 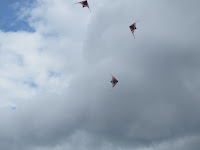 Finally, there were no entries in the freestyle category, and only one entry in multi-kite: Josh Mitcheson. 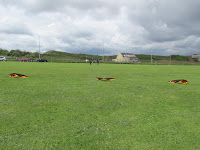 We tried to do the best we could under the circumstances, and at least we didn't crash or make major errors. And Phoenix and Flame were also struggling with the wind, so it wasn't just us.

Mega-team, I hear you ask? Not this time; no one really had an appetite for that in the prevailing winds ... But we did have something special: Pallas Family Flyers dropped by to see what competition flying was all about, and they flew their 3-man demo on Sunday, prior to the ballets. 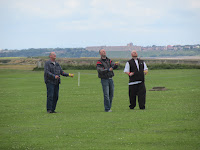 Hopefully, they liked what they saw, and that their first taste of flying in the competition arena will make them compete next year!

Full results of round 3, round 4, and overall results are available, if you're interested. And more pictures of the weekend up north are here.

And that then leads us to the 2016 UK National Champions, with trophies presented in front of the very pretty lighthouse, and with the sound of kittiwakes in the background! 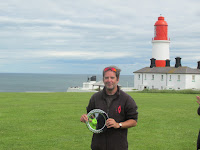 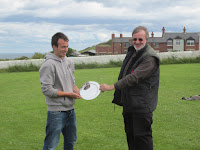 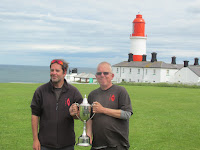 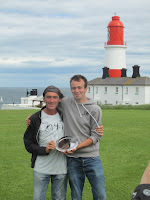 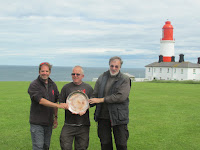 And in addition to the National Champions shown above, Flying Fish won DP Experienced class. 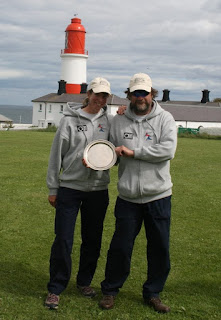 Let's take stock of what we managed to achieve flying national competition this year. To remind you, our primary aim was to increase our overall score by around 10 points, and get ourselves solidly scoring in the mid to high 50s. With an overall score of 60.5, we can say that we most definitely achieved what we set out to do, and more: as we now (just) cleared the 60 points overall hurdle, we were promoted to Master class for next year, after a hat-trick of Experienced class wins. The increase in our overall score of well over 10 points also strengthened our UK ranking, obviously, but the promotion to Master class really is the icing on the cake!

Of course, Phoenix is still well ahead of us, but the gulf between us and them is now reduced to a gap. I played with numbers a bit to see exactly where we are now relative to Phoenix and where we made the most progress. I combined scores from 2014 and 2015 (years with two rounds each) and compared them to the 2016 scores (taking all four rounds). I separated out figures and ballet and the results are shown in the two graphs: average scores for figures on the left, average scores for ballet on the right. Phoenix shown in red, Flying Fish in blue. 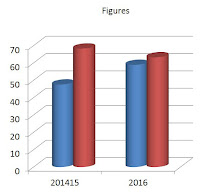 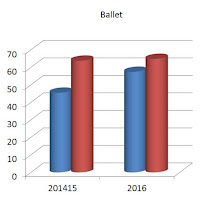 The gap in figures has closed from just over 20 points to less than 5 points (and we beat Phoenix in half of all figures flown this year), whereas the gap in ballet is reduced from more than 18 points to just over 7 points. Can you imagine we're quite chuffed to have gotten this close? Technical routines weren't flown in 2014 and 2015, so I can't make the comparison in the same way, but we were well behind Phoenix in 2016 (73.2 vs 59.0)

We know where we need to improve to increase our scores clearly into the 60s: include more technically challenging elements in both technical routine and ballet. Or, as Andy Taylor put it: expand our vocabulary. So that's where we will focus our practicing on between now and the start of the 2017 competition season. Wish us luck!