If John Barresi designs and brings out a new kite, you take notice. So when his indoor/urban Kaiju kite was announced, I looked into it straightaway, argued with myself that I didn't really need one, and resisted for at least half an hour (good, eh?) before putting a pre-order in. For a pair of them ...

We picked them up from our local ParcelForce depot, which, very fittingly, is located at at Kite's Croft business park. 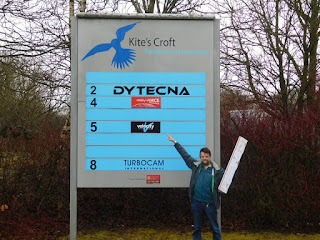 And here's our pair of Kaijus, in a properly urban environment. My kite is white with blue tail and wing tips; Irma's black with red tail and wing tips. As such, they nicely reflect some of the colour schemes we're using as Flying Fish. 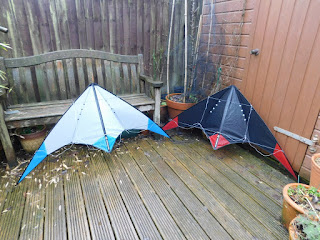 First time out was on our regular flying field in the New Forest, with winds of 0-2mph (occasionally gusting up to 4mph). We tried them on the provided 7' lines, which felt very intimate, given we're used to flying on 45m lines!

John has provided a series of video tutorials to indoor flying, and as we have no experience with flying dual-line kites in zero wind, we started at the beginning: up-and-over. Whereas the 'up' went fine, the 'over' was a bit more difficult. Even though the wind was minimal, the kites are so light that even 1-2mph blew the kites back before we could land them. Need to try that again indoors, or when there really is no wind whatsoever. 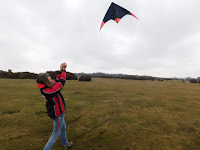 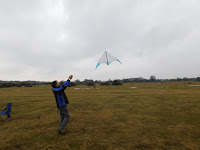 As we're a kite-flying pair, we had to fly them together, of course! The 7' lines don't work for that, so we hooked them up to 15m lines. And that showed that we can indeed fly them together as a pair. Obviously, they're not as precise as our T5s or other team kites; they're not designed for that kind of flying. But once we got used to reducing our input, we could do quite a bit with them. And they do very nice synchronised pancake landings ... 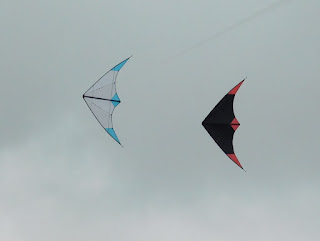 Second time we had then out, we again had winds 0-2mph, with 3mph a gust. As the 15m lines we flew them together on felt a bit short for pair-flying, we made two sets of very light (20lbs) 24m lines. And that really worked a treat for flying them as a pair! 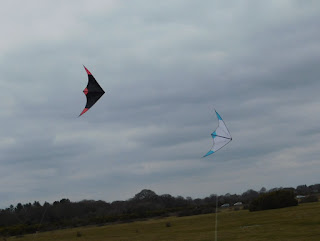 Of course, we want to try them out much more in surroundings they're designed for: indoor and urban. But we'll definitely have them with us when we go to festivals: if the wind dies down completely, we'll still be able to keep performing.

By the way, the name 'Kaiju' refers to mythological Japanese beasts. 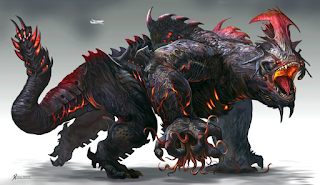 So if we ever fly the pair at a festival, we'll definitely do so to some Japanese music. Something like this, maybe?