Recently, I wrote about possible plans to develop a routine around our Micron and Micron 5-stack, our smallest dual-line kites, for future festivals. Prism Microns have a wing span of 98cm, and weigh 58gr; one reviewer described them as 'bumblebees on amphetamines'.

Given the size of the Microns, I was really intrigued to see an announcement on Facebook by Ocean Shores Kites. They were in the process of producing an even smaller dual-liner, the SuperBee! With a wing span of 93cm and a weight of 43gr, it beats the Micron by 5cm and 15gr.

You (probably) know me: I couldn't resist and pre-ordered two SuperBees in the yellow-black colour scheme (they also come in other colours, but yellow-black appealed to me most). And yes, it is unusual for us to have paired kites in the same colour (eh, Simon?).

Once they'd made the journey across the Atlantic, we could have a closer look at what are now the smallest dual-line kites in our potential festival quiver. I must say that they look very well made, and the quality of the stitching is top notch. Time to set them free on Stoney Cross Plain! 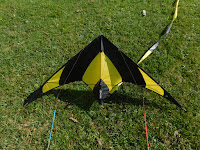 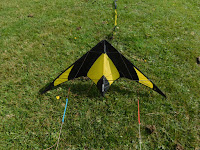 We first flew them singly, and on the ~15m lines the kites came with. 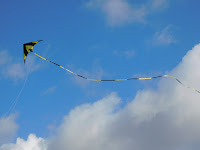 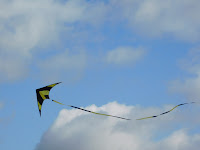 These SuperBees are very fast, requiring only very minimal input, hardly more than finger movements. Initially, being used to 8-footers, we gave way too much input, resulting in massive oversteer, uncontrolled spins and, often, a crash (don't worry; they're very sturdy).

Once we got a bit of a feel as to how to fly and steer our 'Bees, we moved to the next stage: fly them together. 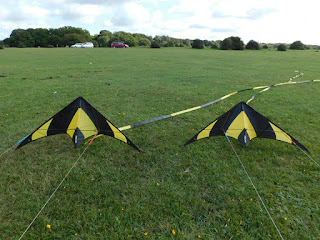 We first flew them on the lines they came with, and then experimented with line lengths up to 35m. To us, they flew best together on 25m lines. 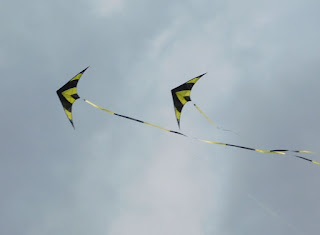 They really are fast and furious, but we had a blast! It will take practice flying them smoothly together, though.

Final stage: remove the tails .... this makes them truly mental to fly when the wind picks up (highest gusts were just short of 19mph). And sorry, no pics of them flying without tails; they were way too fast to fly and take pictures!

Music to fly them to? Just has to be 'Flight of the Wounded Bumblebee'!