When we started flying kites, now almost 9 years ago, our very first dual-liner was a HQ Yukon. At the time, we weren't sure whether we'd like flying kites, so went for a relatively cheap kite which got good reviews as a starter kite. 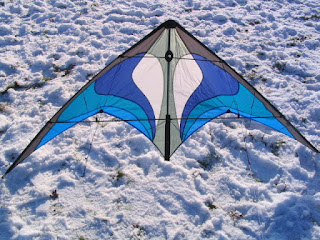 As you're probably aware, things have moved on from those days and that very first Yukon .... Recently, we were thinking of ways to get the public interested in trying out pair-flying. Now I gather that one hurdle might be that people watching us fly at festivals think you need expensive kites in order to fly as a pair or team, and that that stops them in their tracks there and then. So how about showing the public that pair-flying can be fun with a basic ~£50 kite, and that you don't actually need £200+ professional 8-footers? In other words, given that Yukon sells for around £50, how about getting a second Yukon, and develop a simple routine for them to fly at festivals?

One problem quickly revealed itself: although the Yukon is still very much available, the 'cool' colour scheme is no longer produced. Pity, as flying kites with similar or identical graphics just has more of a visual impact. A call on Facebook for another Yukon 'Cool' quickly led me to HQ, who still had one in their warehouse and, when I explained my intention with the kite, were happy to let me have it (thanks guys, and also thanks to Chris Matheson, who put me in touch with HQ in the first place).

So here we've got both our Yukons together on our flying field in the New Forest! 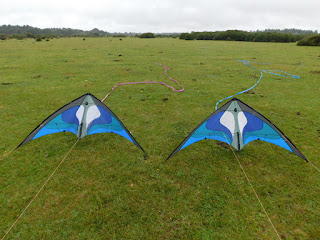 We made no changes to the kites, but added double blue and purple Prism ribbon tails for increased visual impact (tails always appeal to the festival public). Also, we flew them on 35m lines (25m plus 10m leaders) to give us a somewhat bigger window to fly in as a pair than we would have with the 20m lines the kite comes with.

With both in the air, we only needed some minor bridle adjustments to make them fly at the same speed. 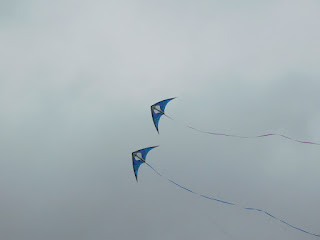 Obviously, they are not as precise as our ~£200 T5s, but we can do most things we normally do with them, including axels and half-axels. And that at roughly a quarter of the price. 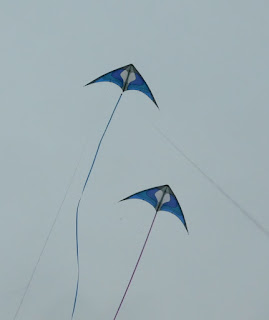 So we now have a pair of decent basic kites, to be flown with music appropriate to the kites and hopefully connecting with especially the younger members of the public, and with a commentator explicitly explaining pair-flying is not only fun but can also be affordable.

I must also admit that it's appealing to have our very first kite now in our festival team bag!
Posted by flyingfish at 07:45