In 2012, after our festival debut, Flying Fish was asked to come fly at Leominster & Hereford Kite Festival. Unfortunately, the festival was subsequently cancelled because of the grounds being flooded. Fastforward four years, and we finally made it to Berrington Hall! Only for a quick splash-and-dash on Saturday, though, as we had other, non-kite-related commitments on Sunday.

Leominster & Hereford Kite Festival is different from other festivals we fly at, for three reasons: 1) no programme; 2) no arena; and 3) no PA. Basically, it's a case of join in and fly, what you want, when you want, and where you want.

The Airheads were there as well and basically violated 2) by pacing out an arena for dual-line flyers, just to make sure we could actually do some team-flying without interfering with the single-line flyers. As we got flying, all using Airdyamics T5 kites (ultralight or standard, depending on the wind), it just so happened that Irma and I ended up flying in-between Keith and Vee on one side, and Peter and Mick on the other side. The name 'Fish sandwich' didn't take long to emerge! 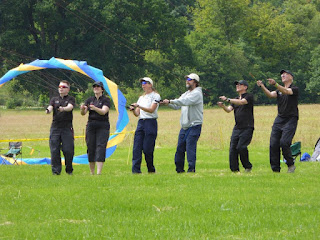 And when Dave Salmon from Sky Symphony joined in, it quickly became 'Fish sandwich with extra salmon'. 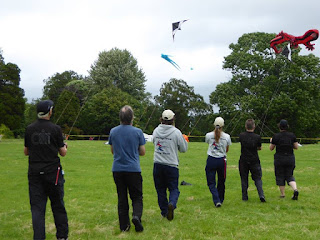 Basically, we flew as a team, with between four and seven members, throughout the day. And you have to admit that the spacing in the wrap isn't too bad, huh? 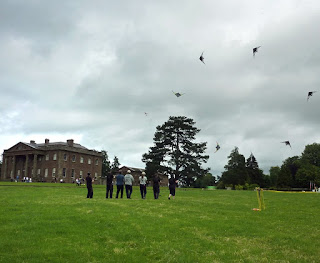 After a break for lunch, we were joined by Martin Crowther, who had been flying his Peter Powell 5-stack in the arena prior. He had never flown as part of a team, and was keen to have the experience. Vee took him along for a bit of basic pair-flying, after which Irma and I joined in to really give him a feel for what flying in the middle of a team was. 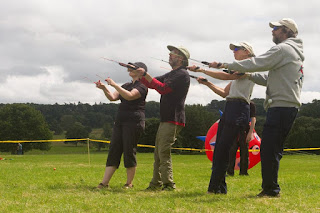 Given that Martin had never flown in a pair or team before, he really impressed with how well he coped. Kept things going even if he made a mistake, didn't panic, didn't take out any other kites. Martin, if you read this, you did fantastically well for a first time! 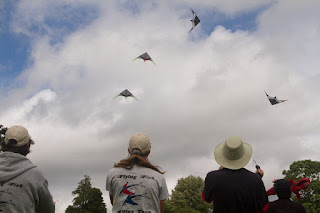 Our first experience at Leominster & Hereford Kite Festival was definitely a positive one, and we'll be back in future years, hopefully for the whole weekend. We got to fly a lot more than on a typical kite festival, and it was also especially good for me. Why? Because when I fly in Flying Fish or with our L-katz team, I always lead and call. Now, I flew the entire day in the middle of a team (usually in #4 position), which is not something I'm used to. So very valuable team-flying experience!

Besides as part of 'Fish sandwich with or without extra salmon', we also flew a few recently acquired Peter Powell kites: a Mk I with aluminium frame, and 'The Monster'; pictures of these and other kites and people (plus very interested cows) are here.