After seeing L-katz, Flying Fish, and Wings on Strings fly at the Southampton Kite Festival, Barry Savell, the National Director of STACK, mentioned to Neil that they have a number of North Shore kites that could be loaned to new teams on a long term basis. The aim of this is of course to stimulate team-flying in the UK. Whether there was interest from L-katz for such an arrangement? Now given that we have had difficulties in tuning the different North Shore Radicals that we have between us, getting matched North Shores for the team would be very useful, especially given their pedigree as the kites that won most world championships. So yes, please! When Barry first offered these STACK kites, I thought he was talking about five North Shore Radicals, which would be great. What actually happened is that we received two kite bags full of North Shores: Konas plus Radicals plus VIPs!! That means that each of the five members of L-katz now has a Kona - Radical - VIP set to fly when we're 'flying team'. 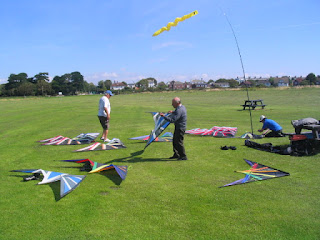 It really felt like Xmas had come early, and when we unpacked the kites, we were running around like kids not knowing which present to open first! Because the kites had been used by several top teams in the past (Airkraft, Punchline), they needed only very minor bridle tweaks at most to fly the same, and off we went, testing them out and getting a feel for which type flies best under which wind conditions. 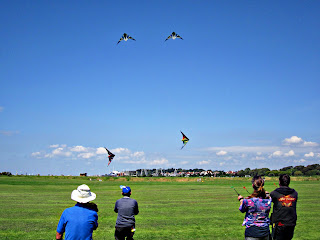 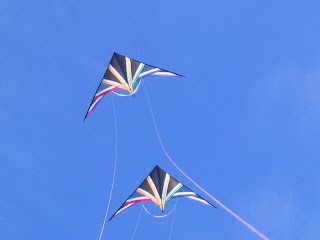 Barry and STACK: thanks a lot for the motion of confidence in loaning us these kites. We'll take care of them, and, first and foremost, fly them!

Photo of the four of us flying North Shore Konas taken by Roger.
Posted by flyingfish at 08:32