Most of the kites in our team kite quiver are purely precision kites, and not designed to do any slack-line tricks. Trying to coax an axel out of a Cerfs-Volants Azur isn't the easiest of things to do! But in the future, we do want to include some basic slack-line tricks (such as axels and half-axels) into a routine (I already have a clear candidate for the music we're going to use for that routine, but I'm not giving that away yet!). With that in mind, we have been keeping our eyes open for possibilities to have a few pairs of kites that are both good in precision and in slack-line tricks. Ideally a small number of pairs that, between them, cover a wide wind range. 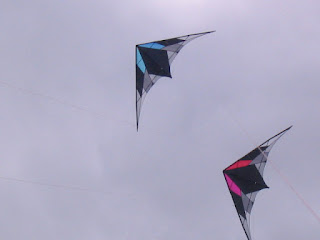 So here's the first of such precision-and-trick pairs to add to our team kite quiver! We already had the 'blue-nosed' KRD Fury 0.85, and managed to add the 'red-nosed' one to it recently. Both were obtained via the Fractured Axel forum. Fury 0.85 kites really are in their element when the wind picks up, say 8+mph: tracking as if on rails, very crisp cornering, and the limit in terms of tricks lies with the flyer, not the kite. Being quite small (2.10m wing span), their pull remains manageable quite high up the wind speed scale.

With the higher end of the wind range now covered, we still need a pair for standard and for light winds; the search goes on!
Posted by flyingfish at 18:00