The year 2020 was a write-off in terms of kite festivals and other events, and in 2021 we only flew at one kite festival (Portsmouth). At the moment, it looks like 2022 will see a return to some normality, and the first event we were invited to come to and put on a kite display was a Jubilee celebration last Saturday in the village of Croughton. The Airheads had asked Flying Fish and two members of Flame to join them in putting on a range of kite displays during the afternoon. 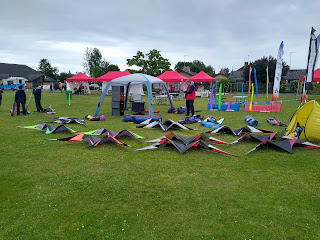 Contrary to the forecast, the morning saw rain, and the wind was, let's just say challenging. Very blustery, unpredictable, and anywhere between 6 and 21mph. Fortunately, the rain cleared early afternoon; just in time! We started off with a 7-strong mega-team, which showed that picking the right kite would be a bit of a problem ... But we pulled it off without any mishaps. 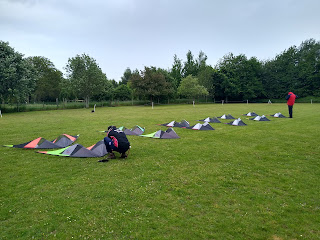 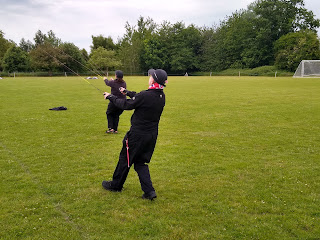 We were up next, and Keith shouted "wrong kite!" immediately after their routine, allowing us to quickly switch to V1s. Glad we did .... First time we flew our 'War of the Worlds' ballet at a public event, and the wind picked up such that, despite the switch to vented kites, we struggled keeping the kites under control. But we did! 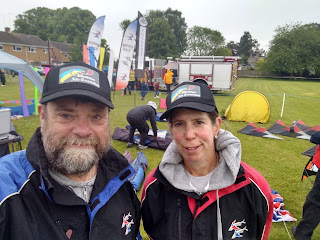 Next up was a slot inviting kids into the arena, letting them have fun with 'doves on sticks' and several other single-line kites. 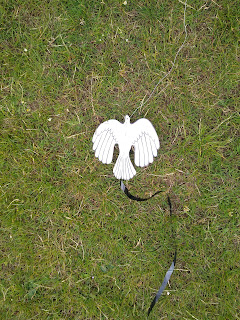 The final kite slot involved first Barry and Fran showing how to fly a dual-line sport kite, alone and in pairs, which was followed by another mega-team, this time with tails. Again, the blustery wind didn't make it easy, and we had one kite-tail collision, but we quickly recovered from that. 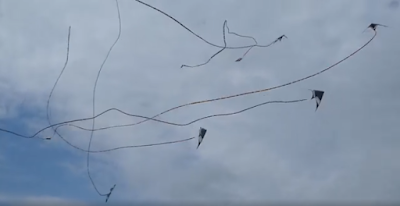 Judging from talking to several members of the public, we put on a very enjoyable show over the afternoon. Several people told us that they'd never seen anything like that before, and one said he was inspired to get himself a proper dual-line kite.

Keith and Vee, thanks for inviting us to join you, and for your very generous hospitality!