Because of covid, all kite festivals we were invited to in 2020 were cancelled, and the same applied to several in 2021 .... apart from Portsmouth! And that meant that, for the first time in almost two years, we were flying at a kite festival again!

Being back at a festival after a two-year gap, and seeing all our kite friends again, felt strange. Felt very 'normal' as well, as if it was just two weeks ago that we attended the last festival ...

So how did it go? Well, the weather was far from ideal: strong winds on both days (well over 25mph on Sunday), and torrential showers on Saturday. But we're kite flyers, so we fly!

Focusing on pair/team-flying, as always in my blog posts, who else was there, besides us?

First of all, Team Spectrum. In Brian's absence, Carl was doing the full honours himself this time, flying routines with two and three kites. Weapons of choice, given the strong winds, were his Cheeteyes. 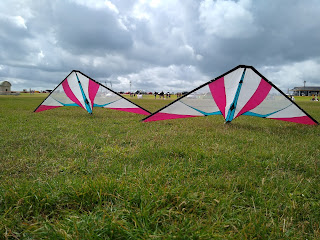 And then, of course, the Decorators! Don't think I've ever been to Portsmouth without them flying in the arena. Using their most vented Revs. they still struggled a bit at times, but nevertheless provided a solid performance. 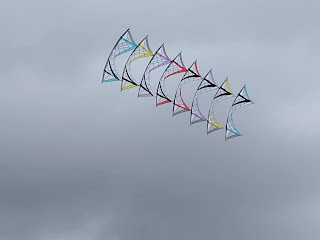 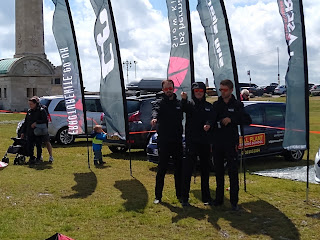 Flying Fish flew routines to 'Rise of the Phoenix' and, for the first time at a festival, to a Carmina Burana mix. The latter routine was basically our technical routine, adapted to fit the Carmina mix. 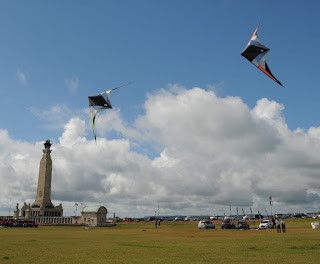 After flying our pair routines, we were immediately joined by Pea and Lisa, and so flew two more routines as L-katz: our old Gloria Estefan ballet, and a 'make up as we go along' routine to the Targaryen Theme. 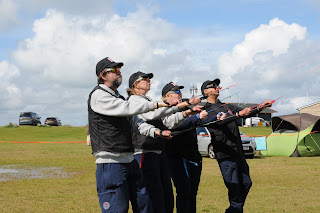 We flew our first slot on Saturday with KiteTech Impulse (mid-vent) kites, but then switched to Airdynamics T5 V2 kites for the remainder of the weekend (and added nappy brakes on Sunday). Flying to music was far from easy, though, and we weren't the only one struggling. Because of the strong winds, it was often difficult to hear the music from the PA system, and that made us miss vital cues in the music more than once. You really need those cues, especially if you want to land right at the end of the music!

Both days were concluded with mega-teams. The Decorators basically formed their own mega-team, and L-katz and Fracture joined for a dual-line mega-team. 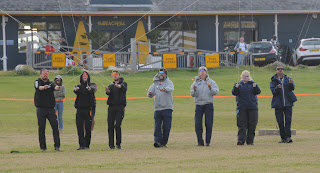 A video of the Sunday mega-team is here. We started out with Fracture leading the mega-team, but it became clear that their Fury kites were slower than our T5 V2 kites, so we switched around during the flying (you can see the switch at 1:40 in the video). Hard work in the prevailing wind, but it was fun!

It looks as if Portsmouth will be our only kite festival appearance this year, but at least we're back!