Our 4th appearance at Streatham Common Kite Day, and it almost didn't happen .... Originally scheduled for mid-May, it had to be cancelled when the Common became water-logged following heavy rains. Fortunately, it could be rescheduled to September!

Weather on the day was absolutely gorgeous: warm sunshine, clear blue skies and not a cloud in sight. Wind was very low, often dropping down to absolutely nothing, and frequently changing direction .... As a result, everyone struggled to fly, from the dual-line flyers dropping out of the sky at times, to the single-line flyers not being able to fly most of the larger showier kites they had brought ...

Team Spectrum was of course present, as they have been at Streatham for 10 years or more. 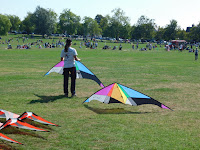 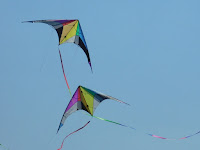 Judging from Twitter, their pairs routine with tails was a clear crowd favourite!

New to Streatham Common Kite Day was Twisted Bridle. Not having that much experience yet flying in ultra-low or non-existent winds, they did a pretty good job keeping things together. 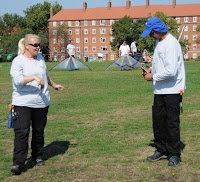 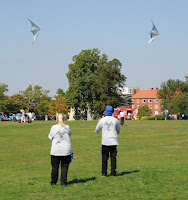 Like the other pairs, Flying Fish flew three slots. The lack of wind limited our options, and we stuck to our "Ruthless Queen" and "Adiemus" routines, which are more suitable for kites slowing down to almost nothing than a strictly choreographed routine (no opportunity for 'wind checks' and a wind recess at a festival!). 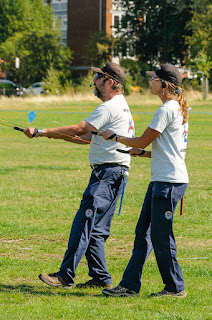 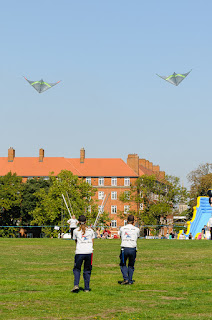 In addition to the three pairs above, Streatham Common had a dual-line team flying again! Flying Fish is part of a larger team, L-katz, and Twisted Bridle was recently invited to join the team. Sporting our new festival uniforms (branded football bibs that make it much easier to quickly switch outfit between routines, especially for the girls), we flew a simple make-it-up-as-we-go-along routine to Gloria Estefan's "Can't Stay Away from You". Between now and the new festival season, we will work on a more choreographed of this, as well as start a second team routine. 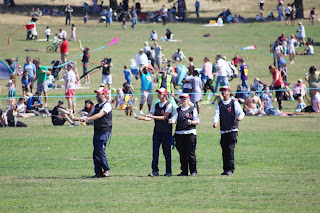 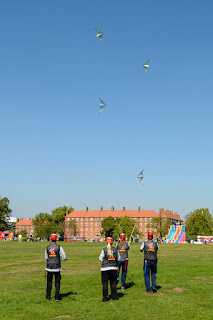 Irma and I were also interviewed for London Live. Th third Streatham appearance in a row that we were interviewed for local tv; something that, for us at least, doesn't happen at any other kite festival we fly at. 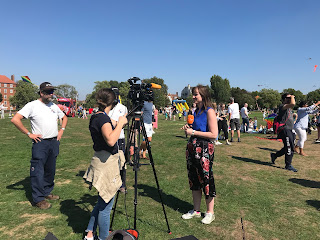 I've said it before: Streatham Common Kite Day has a community atmosphere like no other kite festival we fly at, and the local tv and other interviews we have done over the last three years fit right into that. We certainly hope to be invited back many more times, both as Flying Fish and with L-katz!

A few more pictures are available here (as I said above, not many kites managed to fly ...).