First time we were present at Streatham Common Kite Day, and it really felt different from the kite festivals we usually attend and fly at. Much more a community atmosphere, and there was another clear difference which I'll come to at the end of this blog post. Matching the relaxed atmosphere was a very laid-back attitude of the organisers with regard to the arena programme, which was essentially put together in real-time as the day progressed.

As Flying Fish, we had three arena slots across the day, in which we flew our now-usual "Ruthless Queen" - "Adiemus" pair of routines. The wind was difficult throughout the day: very bumpy and turbulent, and it caused me to make the wrong initial call as to the kites to use. During warm-up, the Airdynamics Taipan T5 V1s were spot-on, but the wind came down during our first routine, so we were really struggling to keep the kites in the air. Switch to the T5 Standards for our second routine, and we stuck with these kites for the rest of the day. Because of the difficult wind, our routines most surely weren't the best we've ever flown, but we did ok (I think). And no, the 'double catch' at the end of the "Adiemus" routine didn't work, because the wind didn't have enough oomph at the end of the window to keep the kites there for long enough. 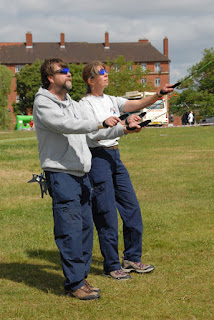 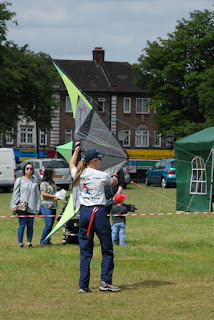 Team Spectrum has been present at Streatham for many years, and it was thanks to them that we were invited in the first place. They also struggled with the wind, especially when Carl and Bryan flew North Shore Radicals with tails, when they couldn't complete their routine a few times due to the kites falling out of the sky. 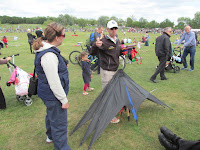 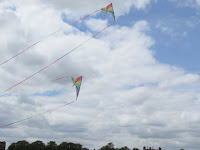 Flame was the third dual-line team present, fresh from retaining their UK National title. And even they had kites fall out of the sky a few times. So if even the national champions struggle with the wind, we don't have to feel too bad about flying below our ability! 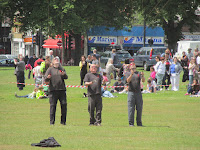 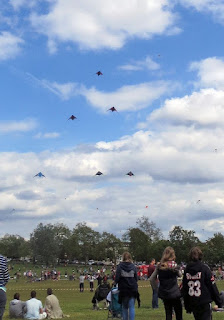 The end of the arena programme consisted of a mini-mega-fly, initially consisting of Flame and Flying Fish, who were subsequently joined by Chris Goff. Interesting mega-fly for sure, because Chris was flying one of his own more trick-oriented kites, on much shorter lines than the others. On the other hand, he's not a member of the reigning World Champion team (Scratch Bunnies) for nothing! It did mean we were sandwiched between the UK National Champions and a World Champion; hope some of their skills rubbed off! We must have done something right, because when talking to a few members of the public after the mega-team performance, they couldn't believe that we hadn't been practicing the mega-team routine for hours and hours, and that we (that is, Barry) simply made it up as we flew. Mega-team was most definitely appreciated by the public! 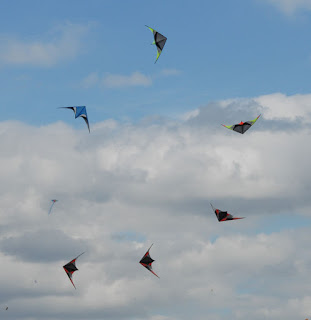 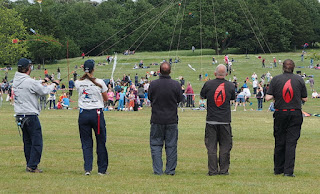 I mentioned above that there was another clear difference with our usual kite festivals. And this was that we had many more members of the public approaching us with questions about kites and kite-flying. And obviously, we're only too happy to talk kites and help people enter the sport!

More pics of the day, including Batman and Batwoman, Swallows, Dragons, Policemen, and Spirits (including the Spirit of Jamaica), plus a crazy Jamaican, are here.