Weather was cloudy on Saturday and gloriously sunny on Sunday. Wind was mostly 9-16mph on Saturday, whereas Sunday started off with very little wind, after which a light, but oh so deliciously clean, 5-9mph wind settled itself for the rest of the day.

As usual in my festival posts, I focus on the team-flying, and there were lots of pairs and teams present! First of all, Team Spectrum, flying their usual sets of three routines (Carl flying two kites, Bryan and Carl flying a pairs routine, Carl flying three kites). 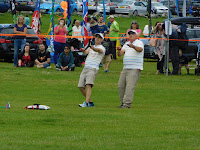 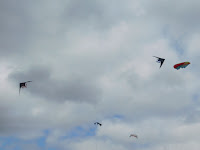 And then there was the appearance (on Sunday only) of the reigning UK dual-line team champions, Flame. 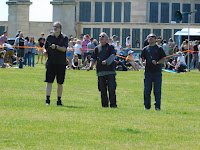 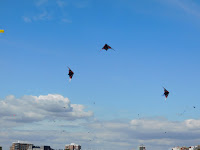 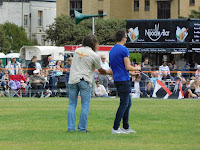 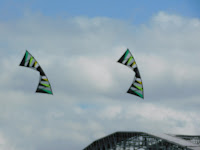 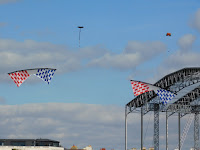 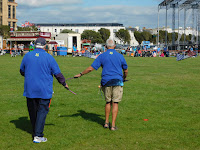 On to quad-line teams, The Decorators made their appearance. 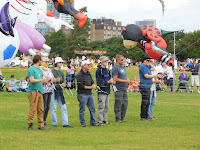 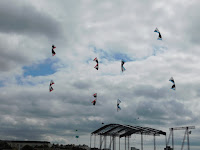 As did The Flying Squad. 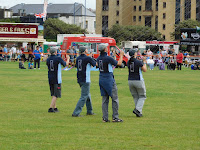 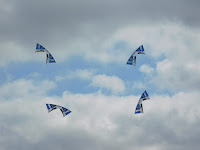 I want to single out one of their routines, which, for me, was one of the highlights of the festival: a 4-man routine flying 7-stacks with tails. Absolutely beautiful to watch! 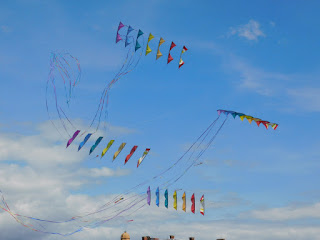 And then to Flying Fish (yes, Flying Fish is our name, despite Paul Reynolds having more and more difficulty remembering it; it started quite innocently at Exmouth Kite Festival, but I'm now starting to get worried about him losing it, one shiny marble after the other ...).

We flew a total of nine routines, six different ones; this basically continues what we've been trying to do this season: expand the range of routines we fly at a festival, combining general routines with more kite-specific ones. We flew 'Chariots of Fire' three times, 'Adiemus' twice, and 'Ruthless Queen' once; all these with our T5s (V1, Cuban and UL). 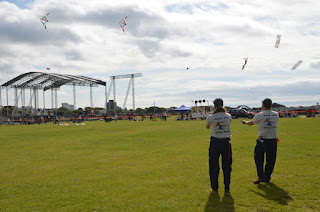 Then we flew our 'Superman' routine, with the customised Spin-Offs, once on Saturday, as well as our 'Thriller' routine with the VampDevils. 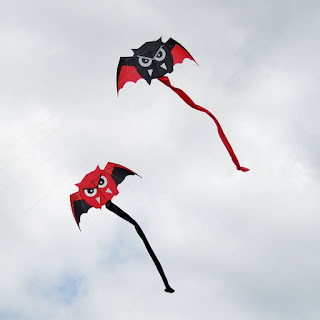 And we were really pleased to be able to debut our 'Jaws' routine in our final slot on Sunday! 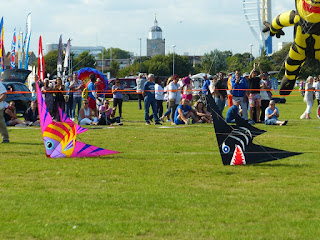 We've been working on it, on and off, for so long now, and it was great to finally be able to bring it to the public. Judging from the reactions from kite flyers as well as members of the public, it hit the spot.

Portsmouth wouldn't be Portsmouth if it didn't end with a Revolution mega-team; the '26' indicating this was the 26th Portsmouth Kite Festival.. 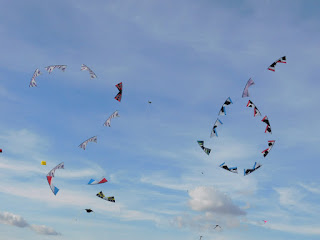 Lots more pics, including many single-line kites, are here. One picture I post here: I was pleased I finally got to meet Kate, the kite-flying dog. And get a few doggy cuddles from her. 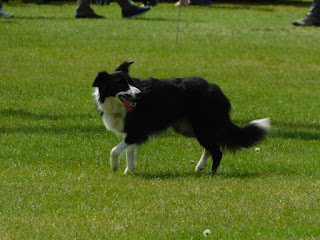 She wasn't flying any kites at Portsmouth, but this video shows what she can do: