Last year's kite festival at the Dunstable Downs saw bad weather cancel half of it, so we were very glad that the forecasts for the weekend were pretty good: some sun, some clouds, light-ish winds, and no rain!

Focusing, as always, on the team-flying in this post, we were joined by the usual suspects: 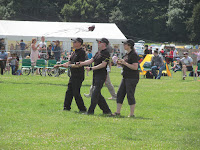 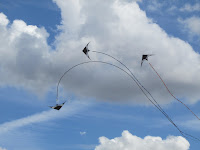 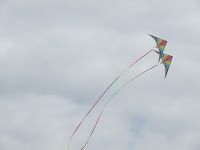 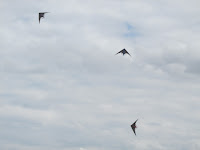 and The Flying Squad, 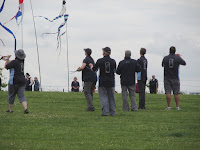 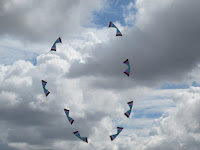 who all put in their usual solid performances.

Coming to Flying Fish, we were very pleased with our flying at Dunstable. Why? Two reasons. First of all, especially in our Saturday afternoon slot, we really nailed our competition routine. Probably the best public performance of the 'Chariots of Fire' ballet we ever did. And it wasn't just us feeling pleased. Several knowledgeable people afterwards complimented us on it. The second reason is that we decided to debut our VampDevil routine. We'd been talking about flying this at festivals, but for different reasons, it didn't materialise. Until now, that is! 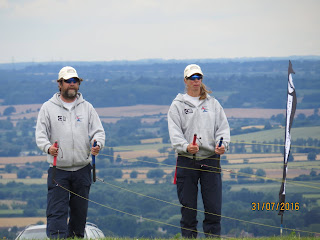 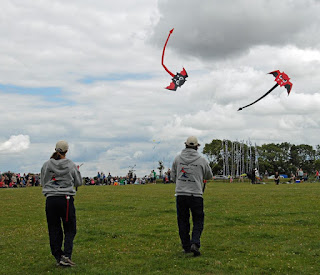 Given that we'd never actually flown this routine to music, we really didn't do too badly. Yes, it needs more work, more variation, and a bit more thought as to when and how to use the 'wing-flapping' in beat with the music (we heard you, Vee!), but for a first time we could have done a lot worse. And several people said they really liked it, so who are we to disagree with them?

No video of our 'Chariots' routine was made, as far as I know, but there is a 30-second video of part of our VampDevil routine here.

With Airheads and us present, we of course had to come together again as 'Fish sandwich' to open and close each day with a mega-team. 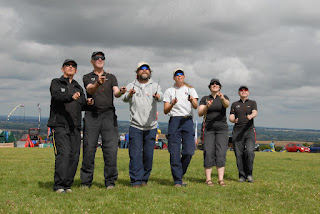 On one occasion, the sandwich was flame-grilled ...

Loads more pictures of the festival weekend are here, but I do want to highlight one particular kite. Or rather collection of kites: Cao Quan's Vietnamese Flute kites. We participated in the Vietnamese kite challenge, and flew several of these unique kites (more pics of them in the linked album). 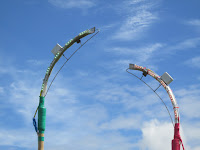 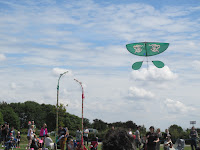 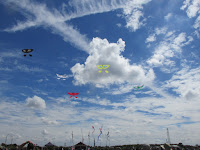 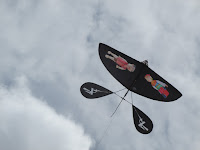 Picture credits of us flying the VampDevils: Marie Coombs and Carl Wright; of Fish sandwich: Carl Wright.
Posted by flyingfish at 09:05