Our third successive appearance at Basingstoke; we're gradually becoming part of the furniture! Weather was nice and mostly sunny, but the wind was challenging, on both days, but for different reasons. On Saturday, the wind was variable and blustery, full of random holes, bumps and brick walls. We coped, but our routines that day certainly weren't our best ... 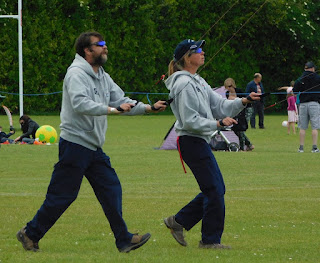 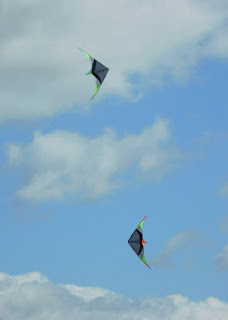 We flew our standard Airdynamics T5 kites, not because the wind was perfect for standards, but because the standards gave us the least worse compromise between needing an ultralight and a vented within seconds.

On Sunday, the wind was much lighter, but now had a tendency to drop away completely at times. And of going thermal, turning around the arena so you had no idea where the wind was coming from. T5 Cubans were the obvious kite of choice this time. We almost pulled of another 'double catch' at the end of our first Adiemus routine on Sunday. Irma had caught my kite and I was within inches of catching hers, when she turned her kite around and I was left running across the field trying to grab the kite before it hit the ground. I failed ... 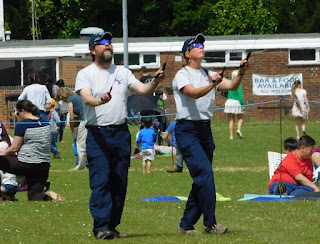 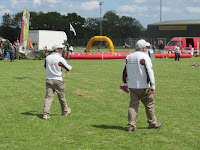 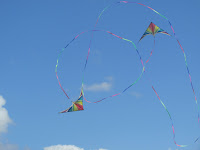 The Airheads were present as a pair (Keith and Vee) on Sunday only (work prevented them from attending on Saturday), and they also flew T5 Cubans. 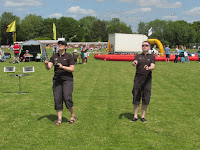 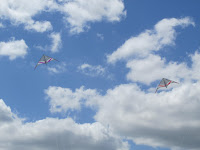 I mentioned above that we were struggling with the light-and-sometimes-absent wind on Sunday, but all the dual-line pairs had their kites fall out of the sky at least once due to lack of wind ...

Moving from two lines to four lines, The Flying Squad was present with a 4-(wo)man team (Stephen, Susan, Helen and Simon), showing off their skills, and not appearing to be bothered too much by the challenging wind conditions. 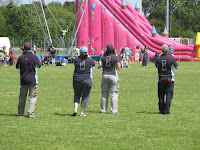 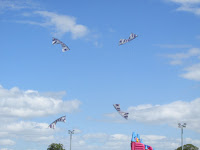 Whereas The Flying Squad have been regulars at Basingstoke for many years, I'm very glad to see young blood come into the sport of pair/team-flying (and the UK really needs that!). This young blood comes in the form of 'Tall and Small', a new quad-line pair, consisting of Josh and Ellie. They did fantastically well, especially given that Ellie only took up flying a Revolution a couple of months ago! I look forward to seeing much more of them at events this year and in the years to come. 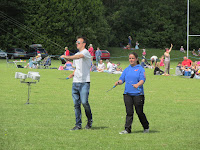 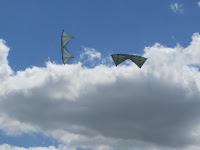 And not only did 'Tall and Small' fly a pairs routine, they also joined in with The Flying Squad and a few others for a 9-kite mega-fly. 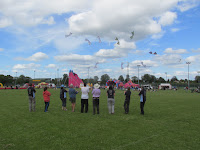 Lots more pictures of the weekend are here, but I do want to highlight one exceptional kite flown at Basingstoke: Christian Baden Powell's Taranis. A truly magnificent creation, and I'm very glad to have seen it fly for real (after having seen photos and a few videos), and to have helped launch it! 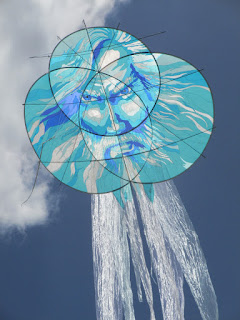