Weymouth Beach Kite Festival is our usual opener of the festival season, but this year there was one crucial difference: in previous years, we had come for one day, to watch, talk to people, and maybe ground crew and help fly some single-liners. This year, we were officially 'invited flyers'! So obviously, we stayed over for the whole weekend, using the Fairhaven Hotel overlooking the Esplanade and beach. 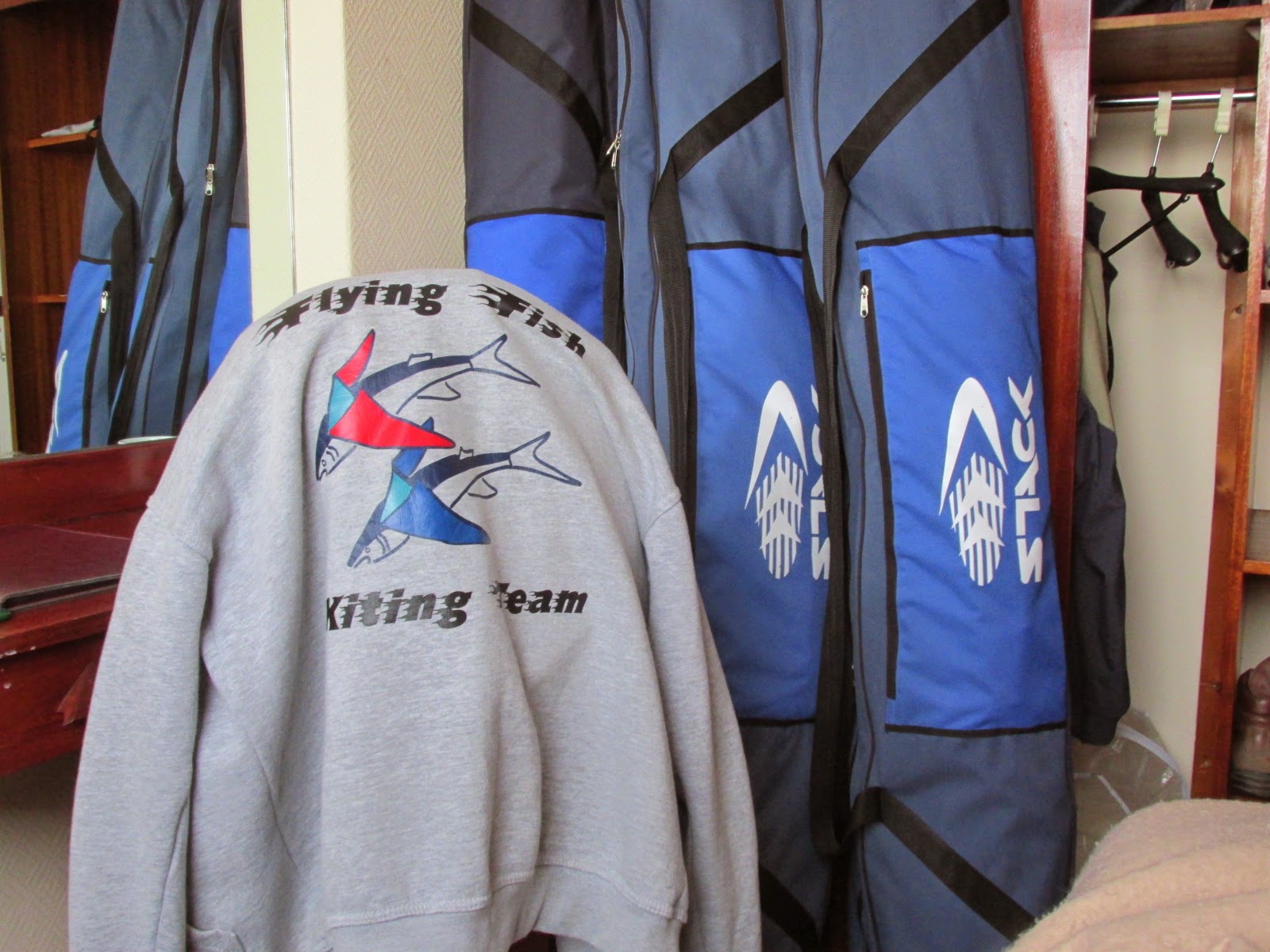 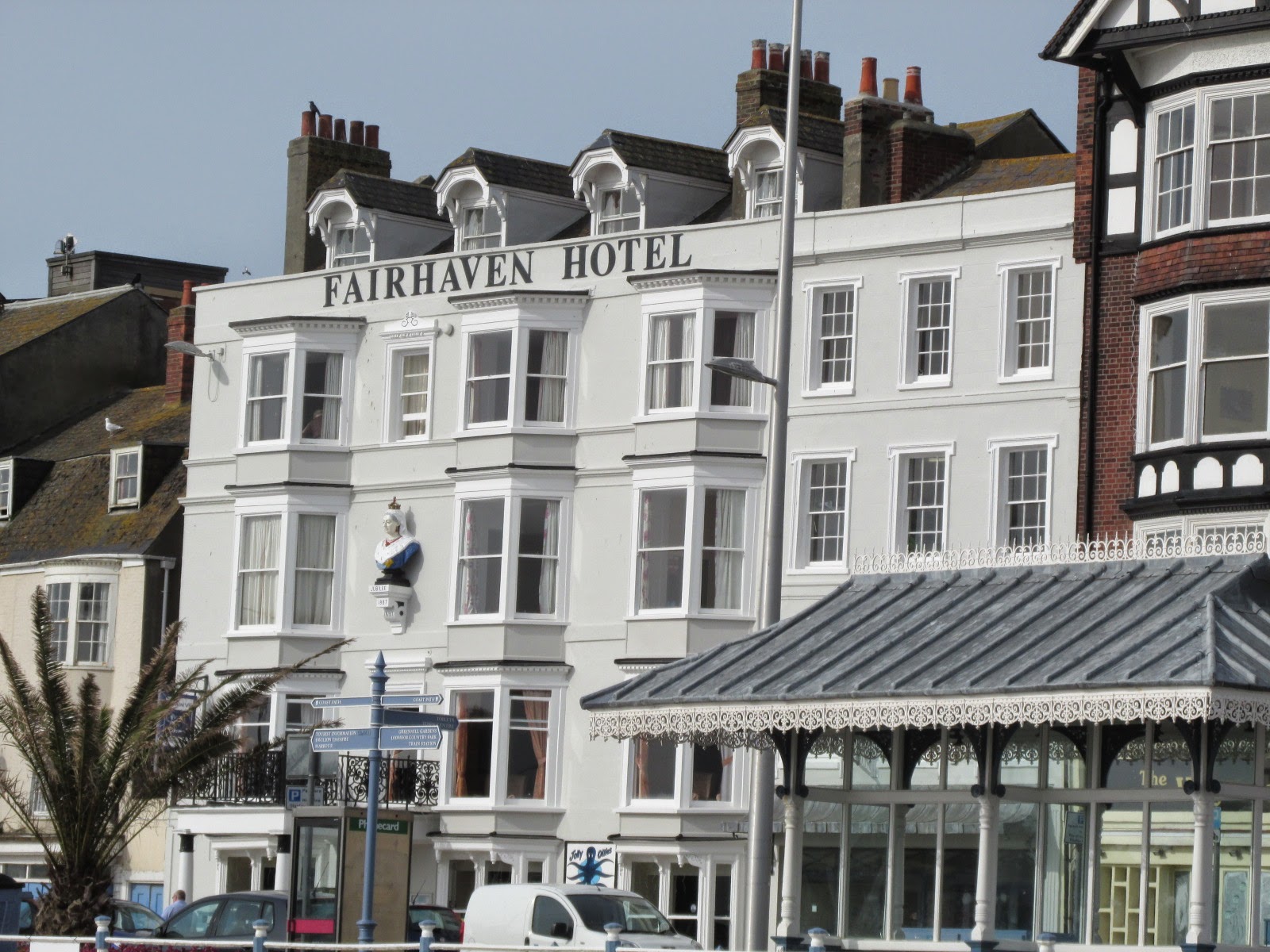 Winds were light during the entire festival. On Sunday they were prone to dropping away completely, whereas Monday's winds started off riddled with holes, and ended sweet and smooth. Flying our Airdynamics T5 Taipan SUL (while having our T5 Cubans and T5 Taipan Standards on standby, just in case), we flew four times, with the worst performance on the Monday morning, when we kept hitting holes and ended up with Irma's kite going through my lines, forcing us to abandon. Best performance was that same afternoon, when the winds had become sweet and smooth, and we really hit our routine. Glad to go out on a high! 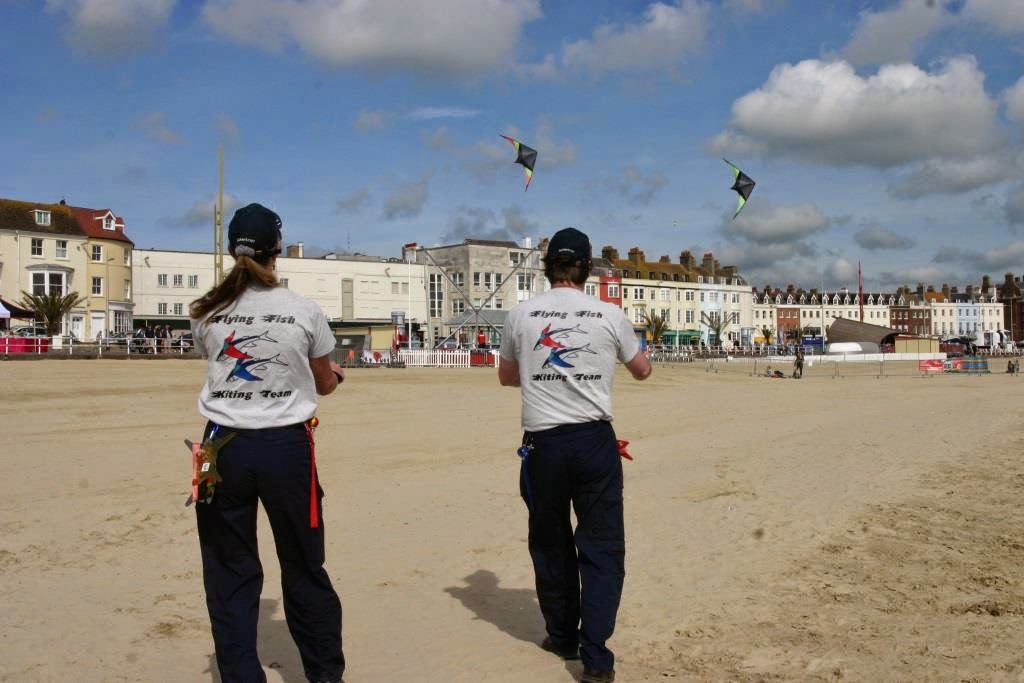 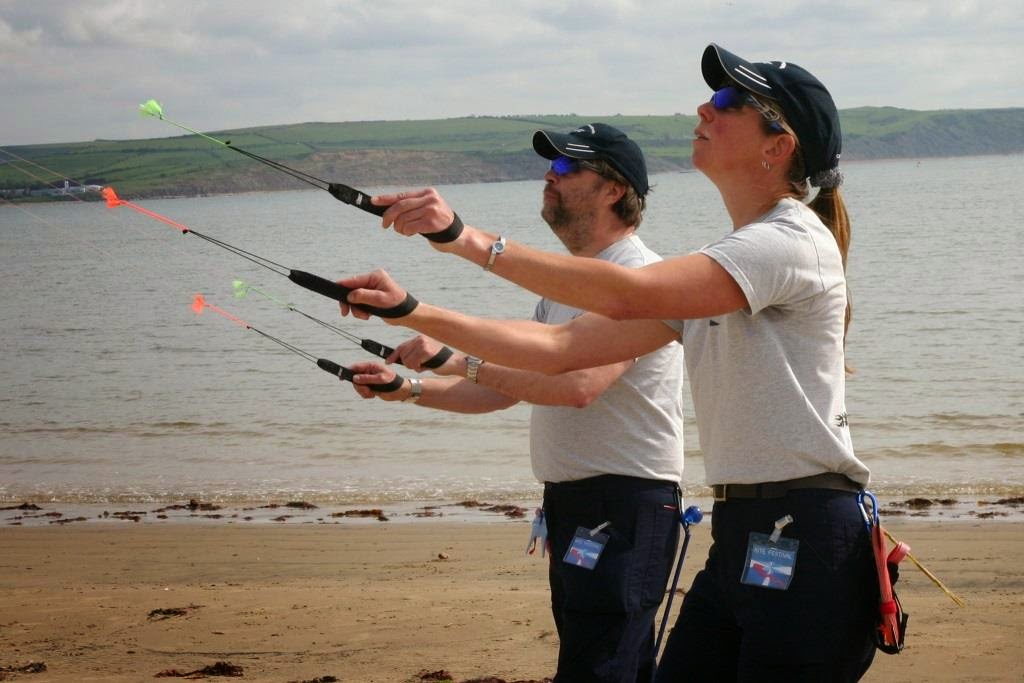 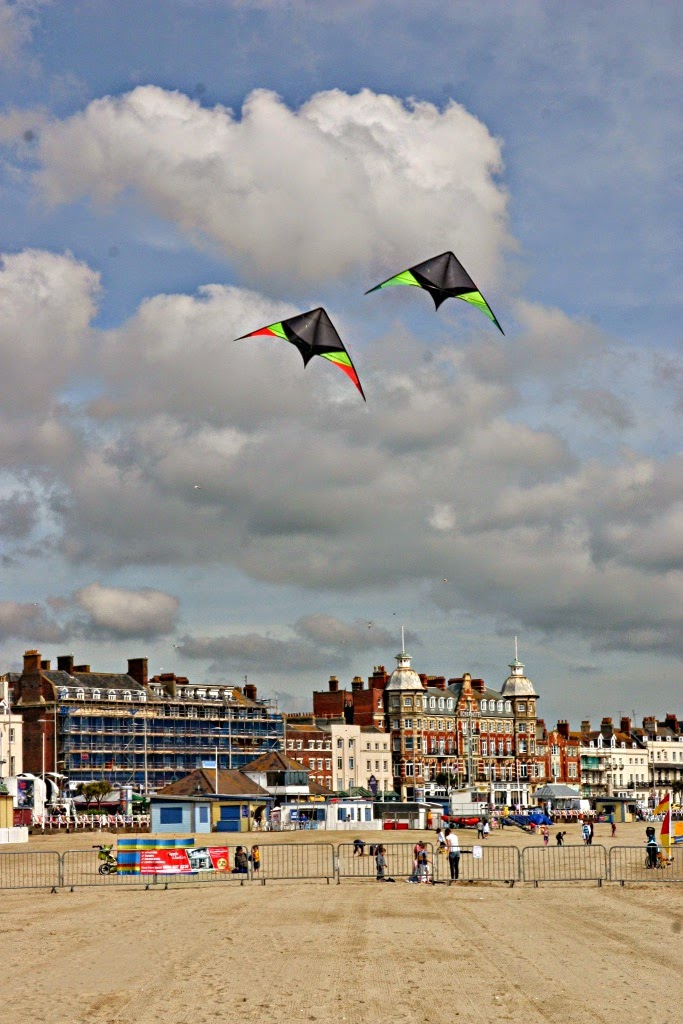 Airheads was also present, as in previous years, mostly flying their T5 Cubans (with tails, pretty brave decision in the fickle winds!) 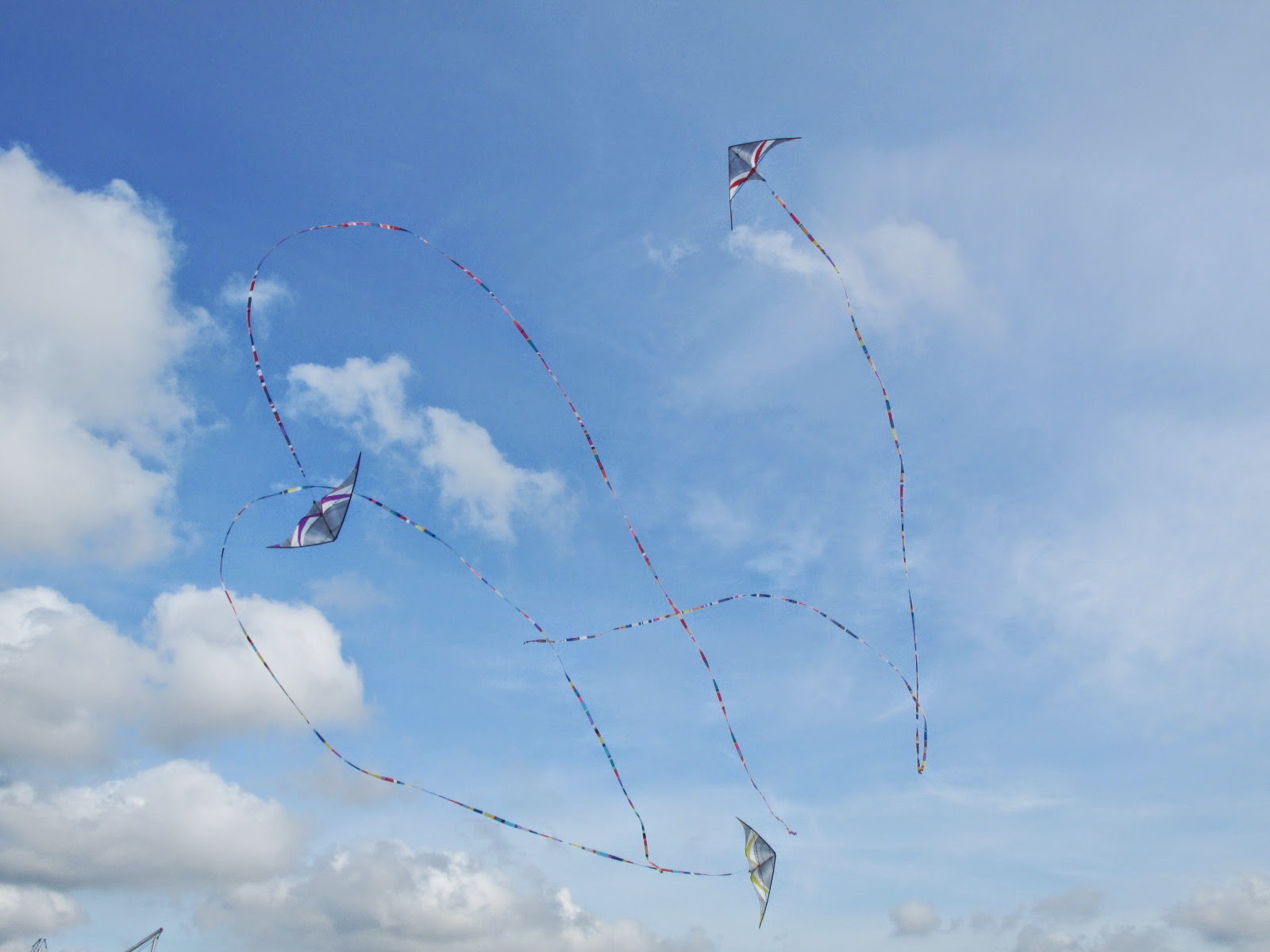 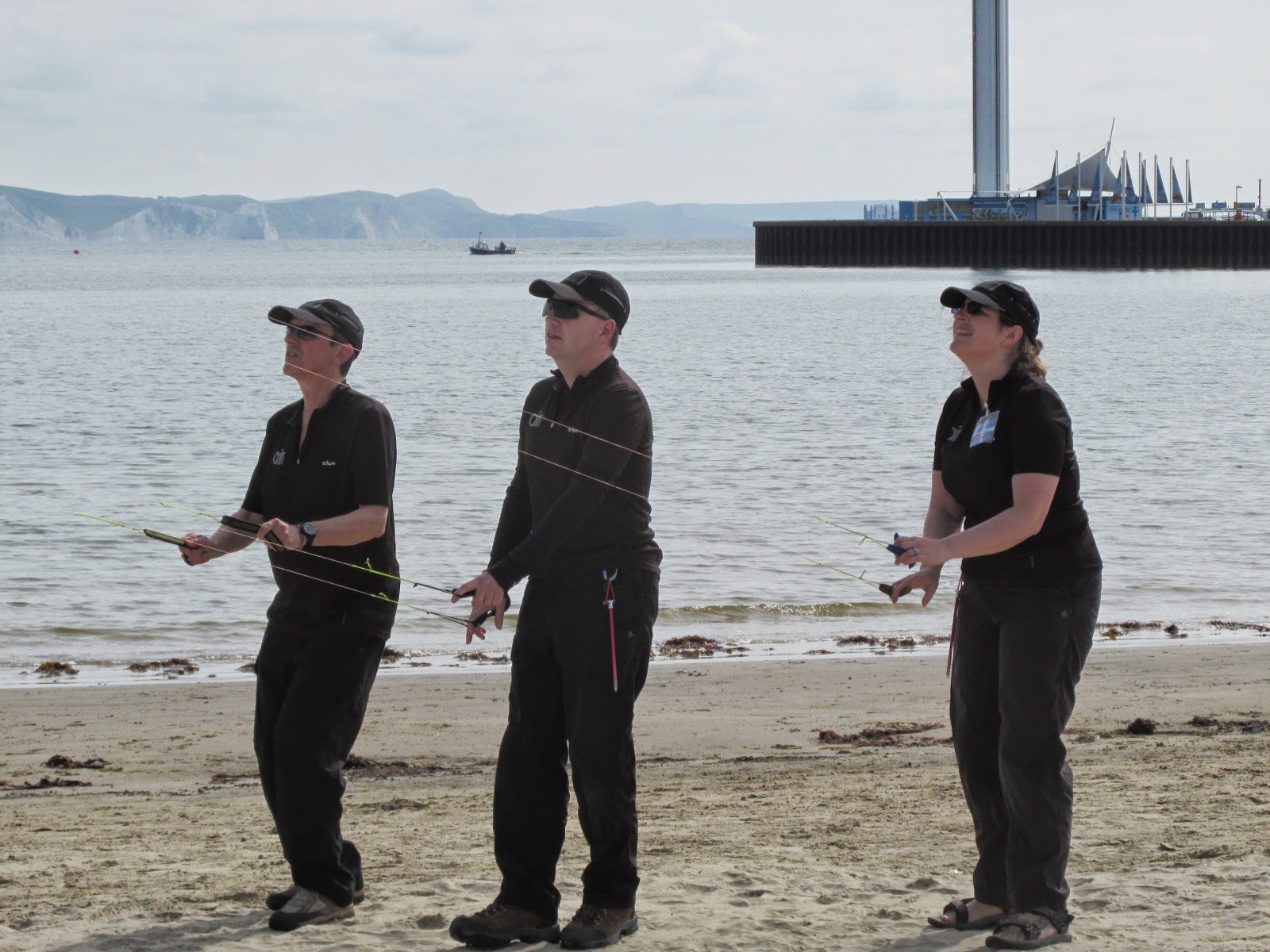 Flame, back from the World Championships, where they came 10th, flew their trademark Fury kites. 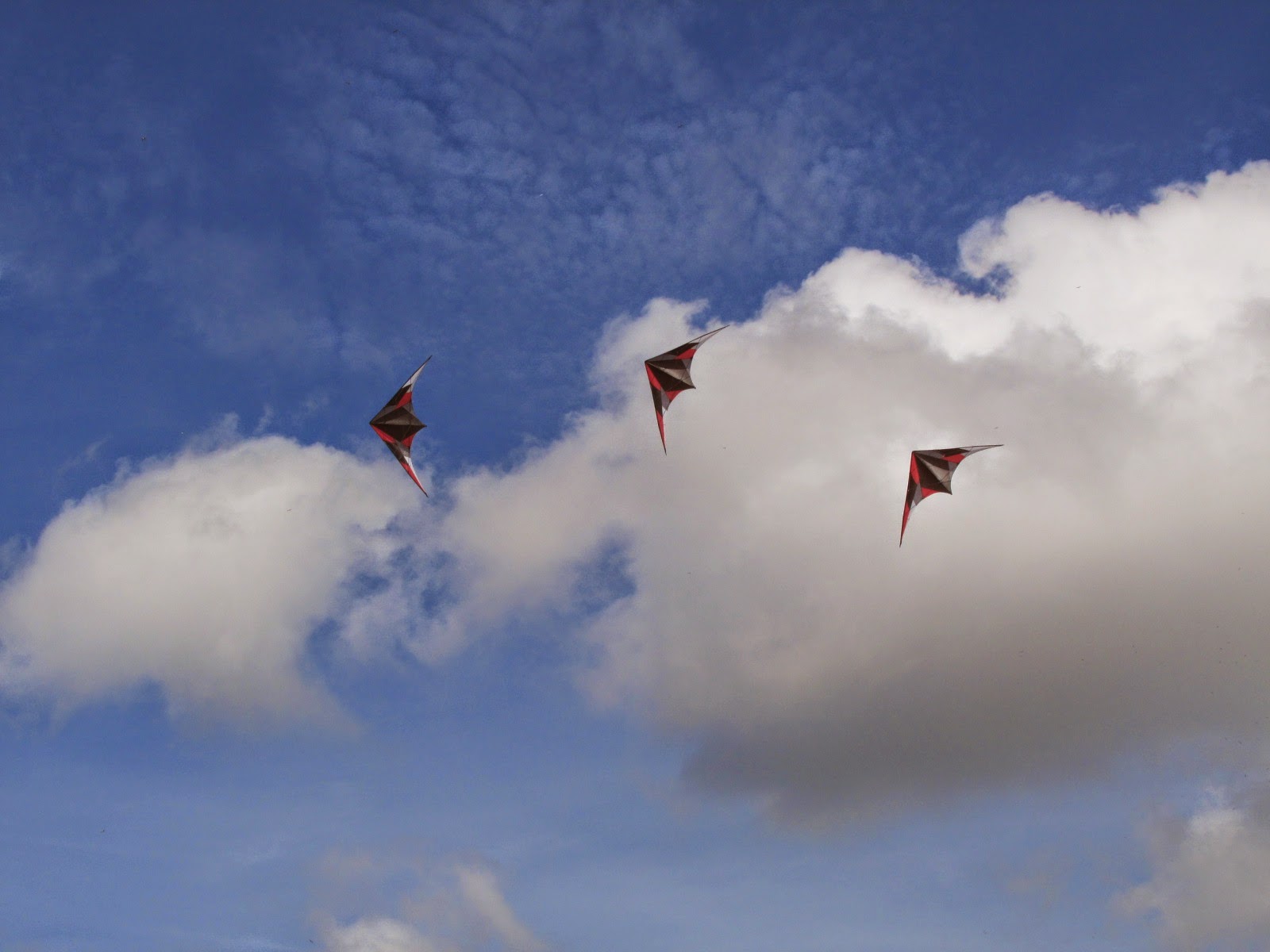 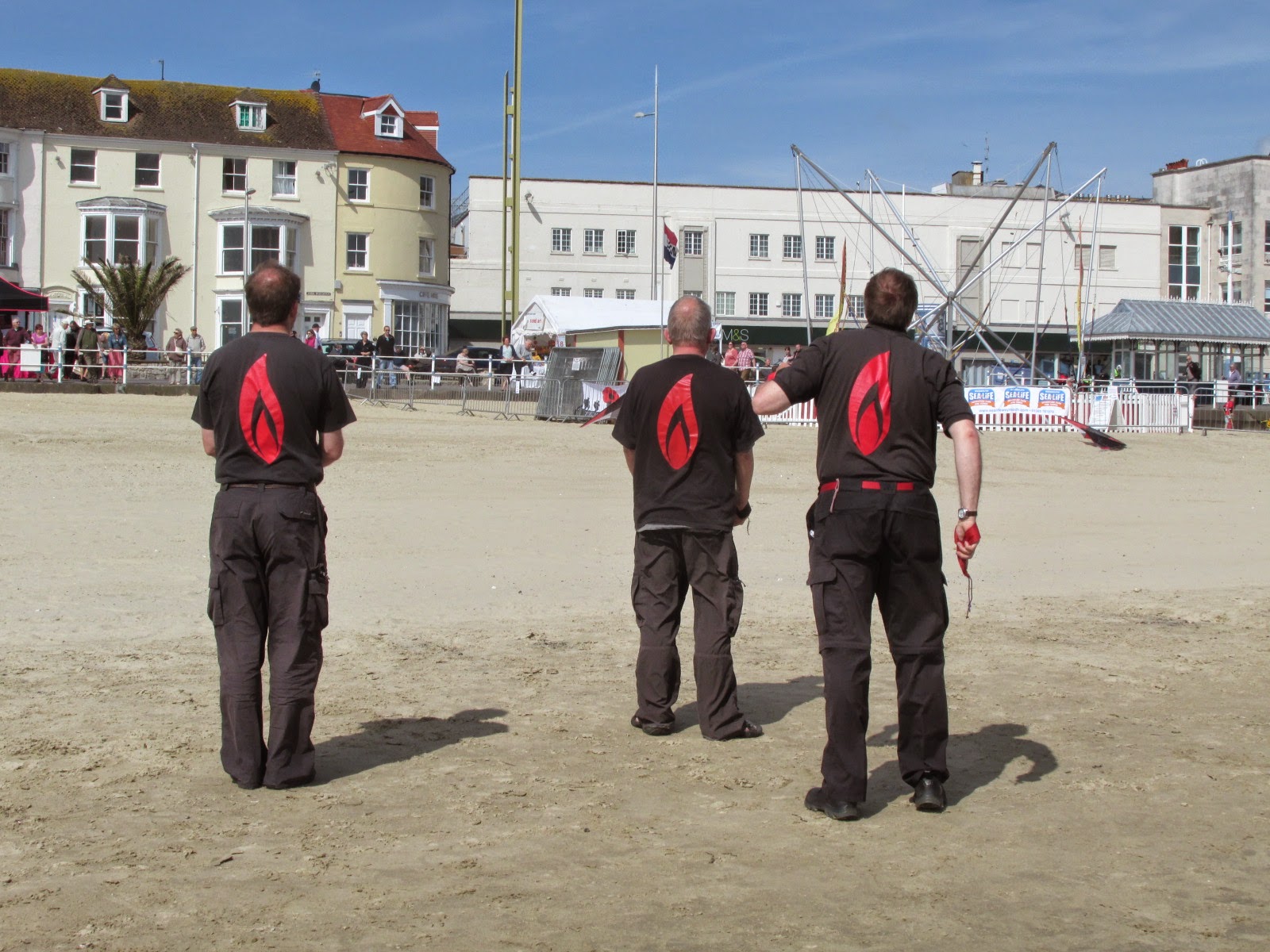 And the final dual-line team/pair was Close Encounters, with Peter Taylor from Airheads standing in for Marilyn. Pretty impressed with how quickly he adapted to the two routines they flew, given that he and Allan had only practiced once or twice together! 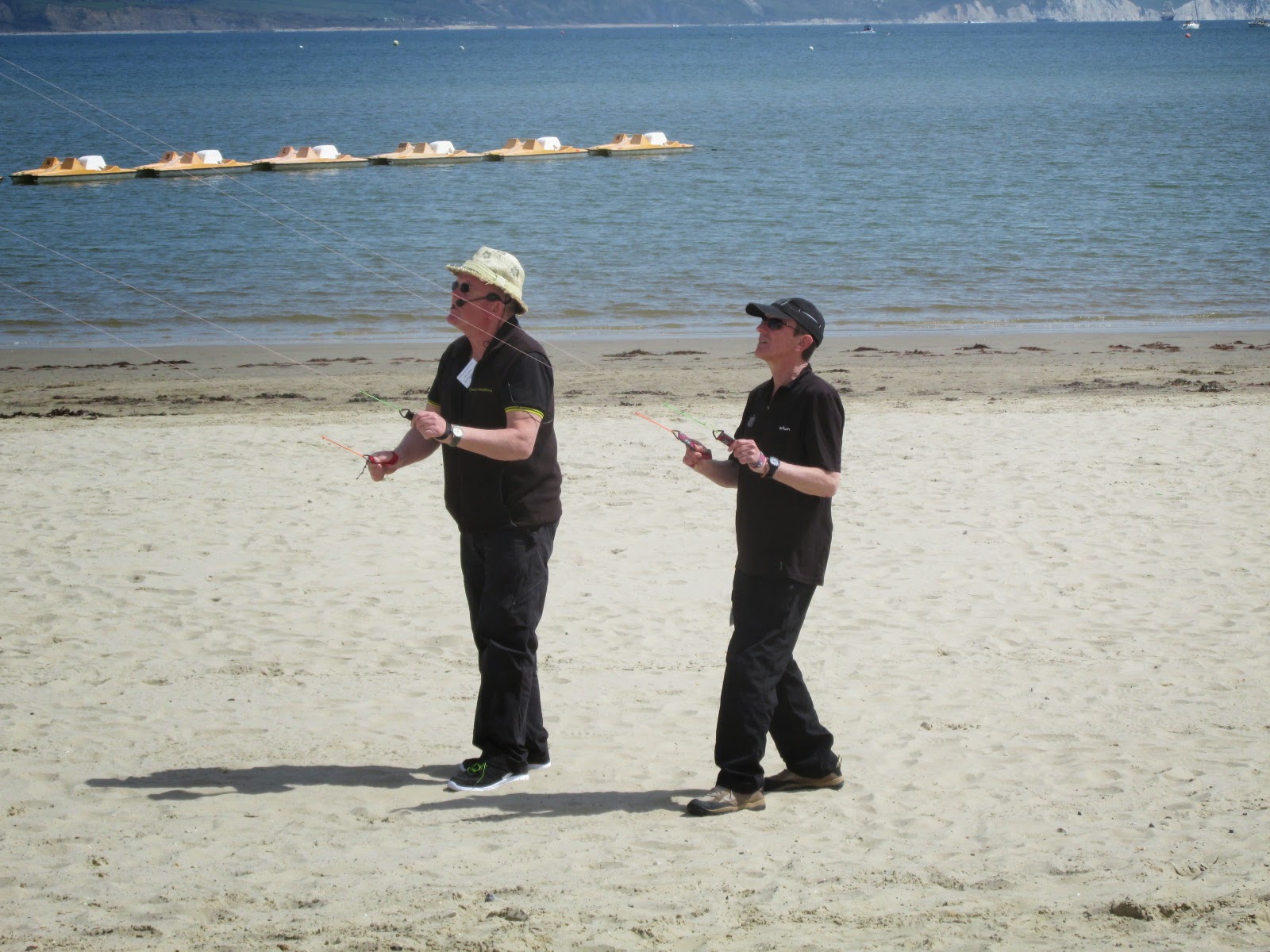 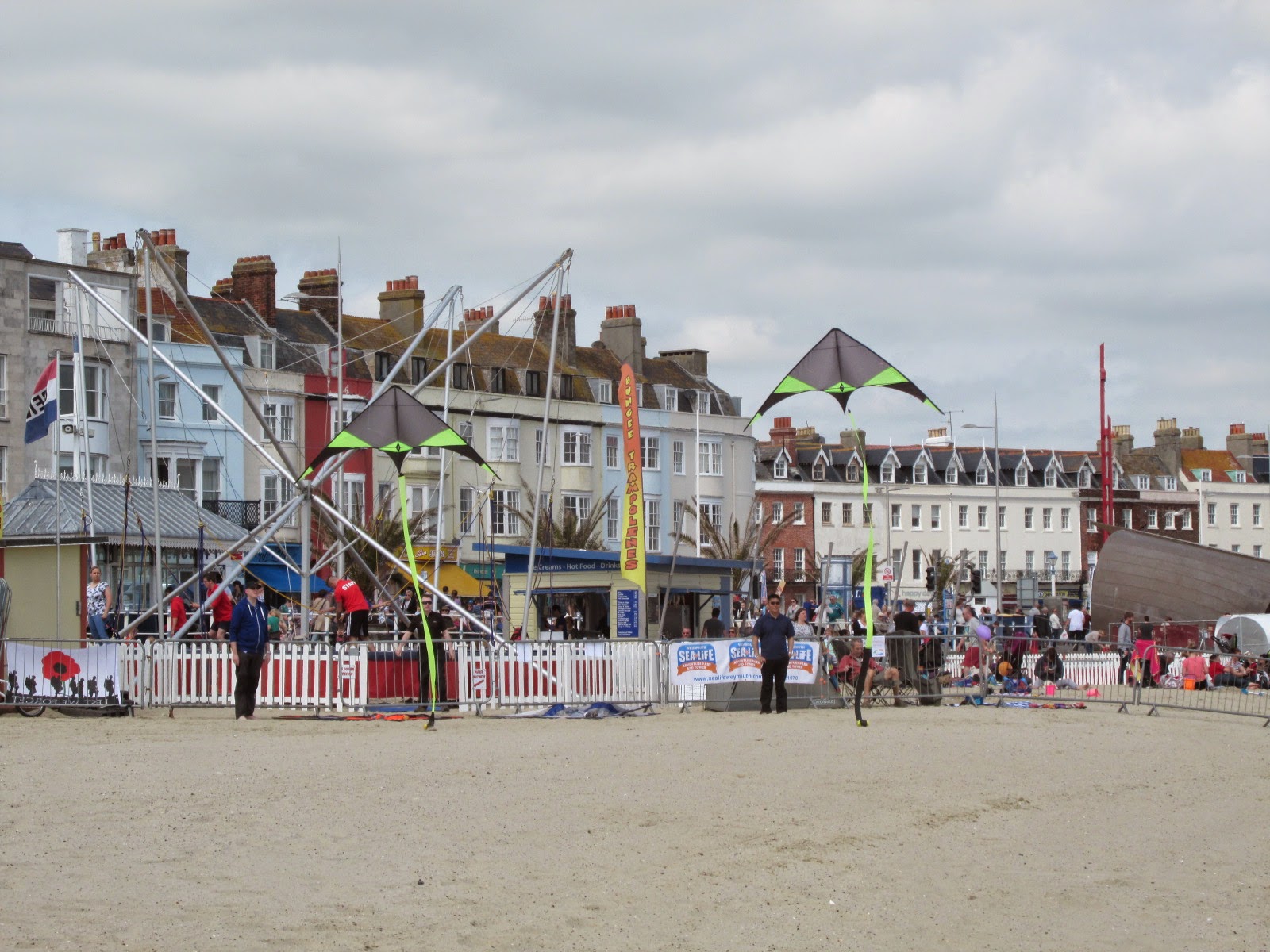 The quad-line teams present and performing were The Decorators, who have been coming to Weymouth every year recently ... 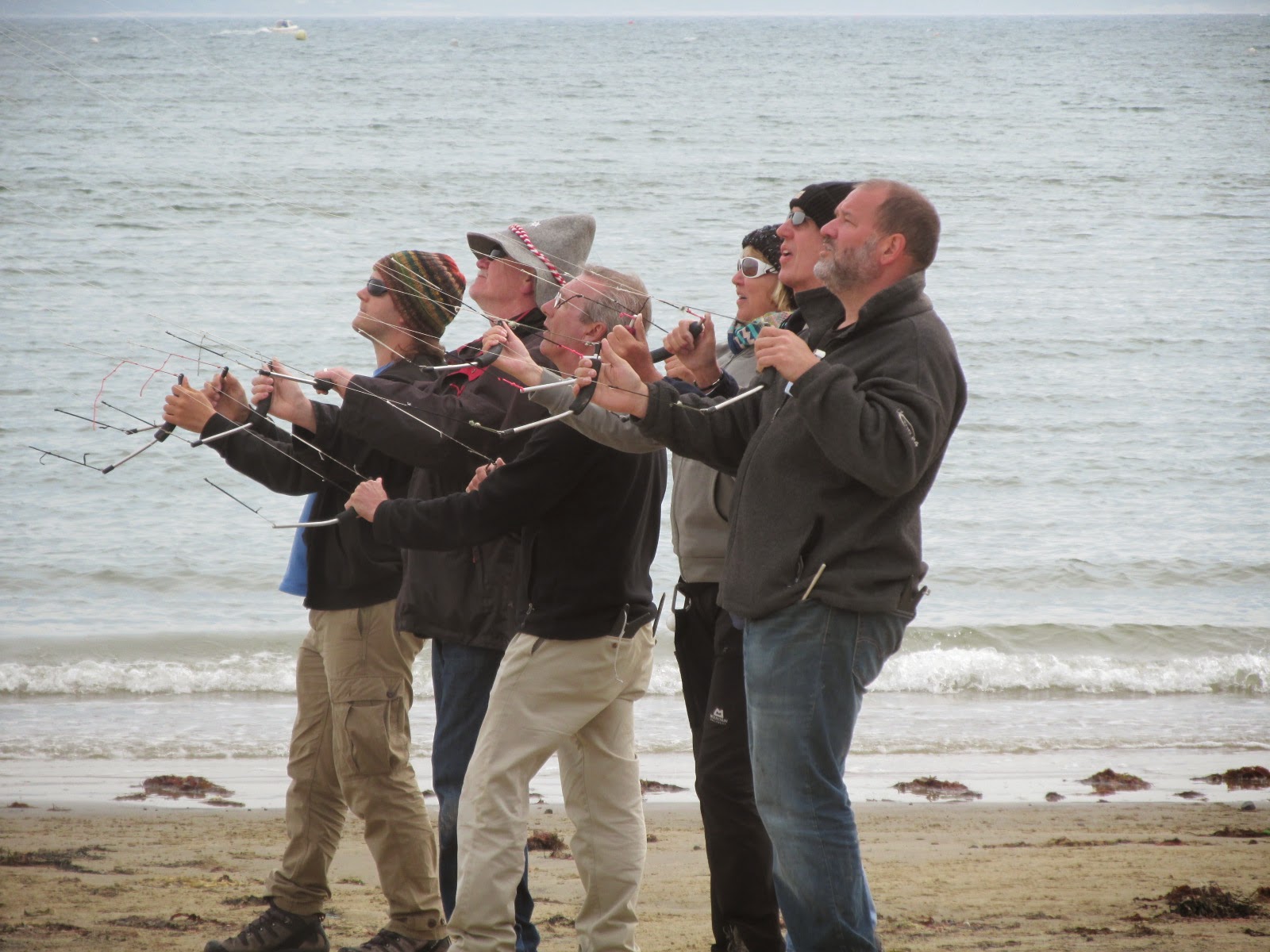 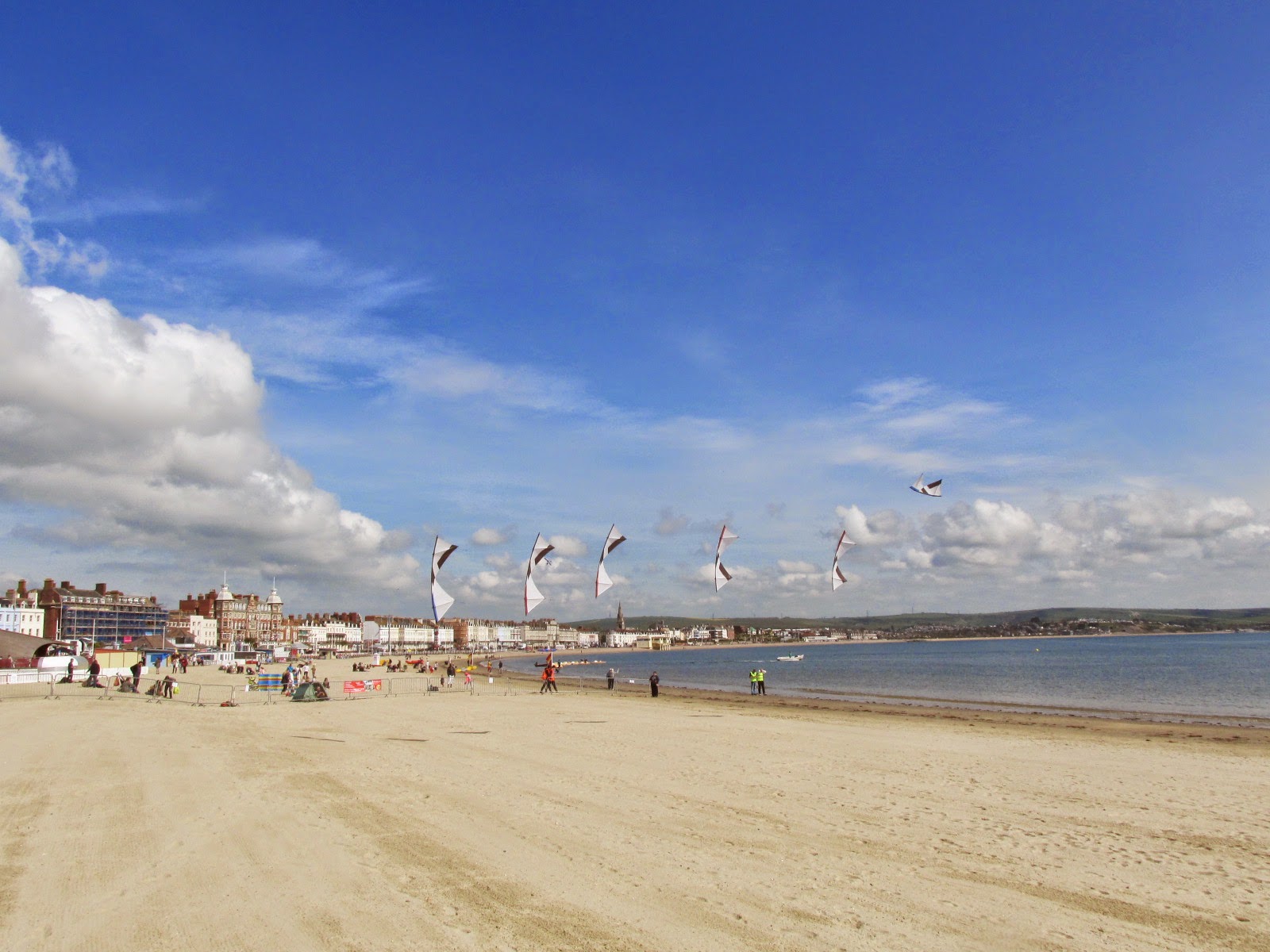 ... and Fusion, who had their Weymouth debut. Both teams flying Revolution kites (what else?), and both teams giving a solid performance, even though they were at times struggling with the winds (if Rev flyers walk backwards, you know there is a problem with the wind ...) 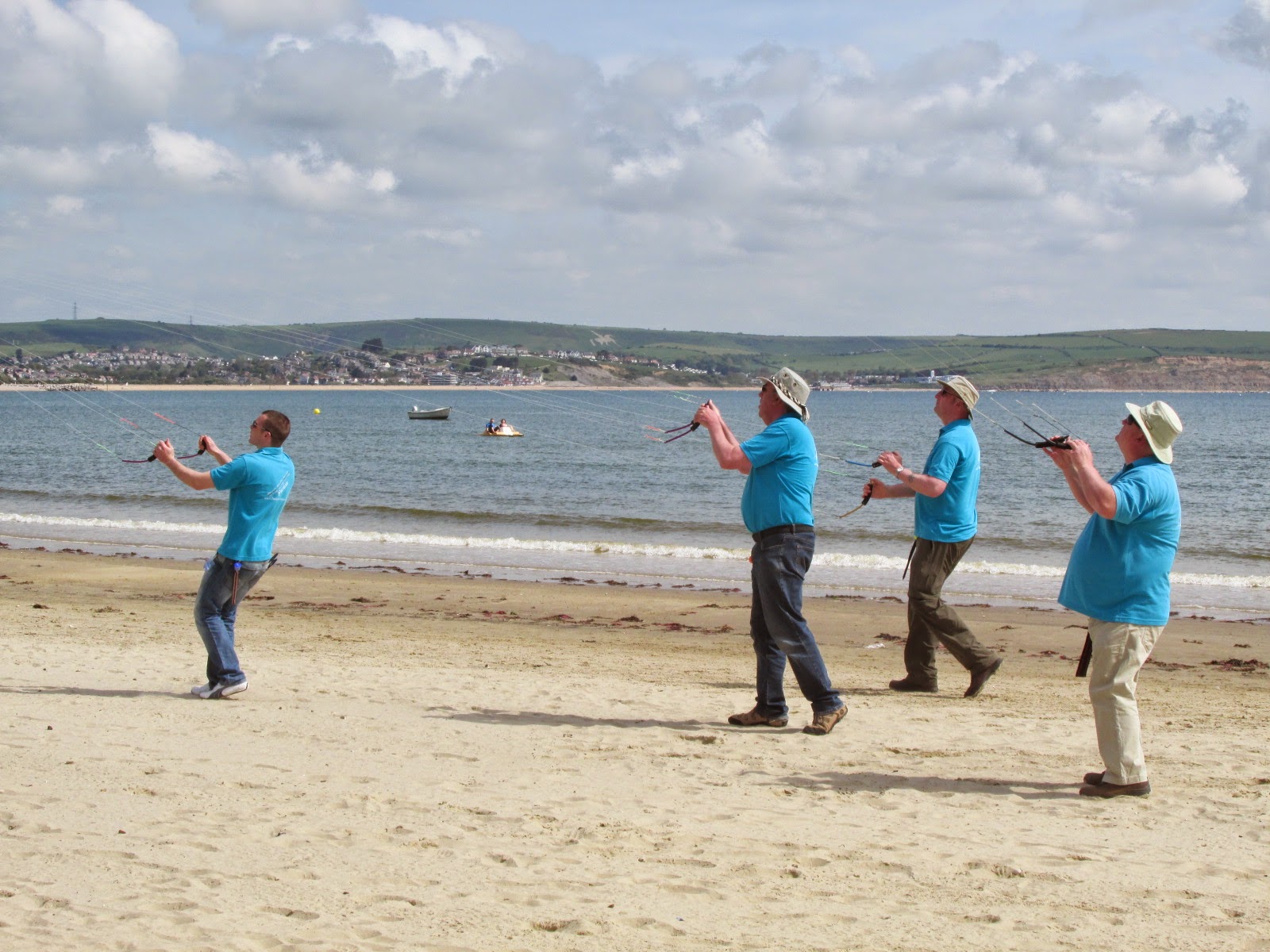 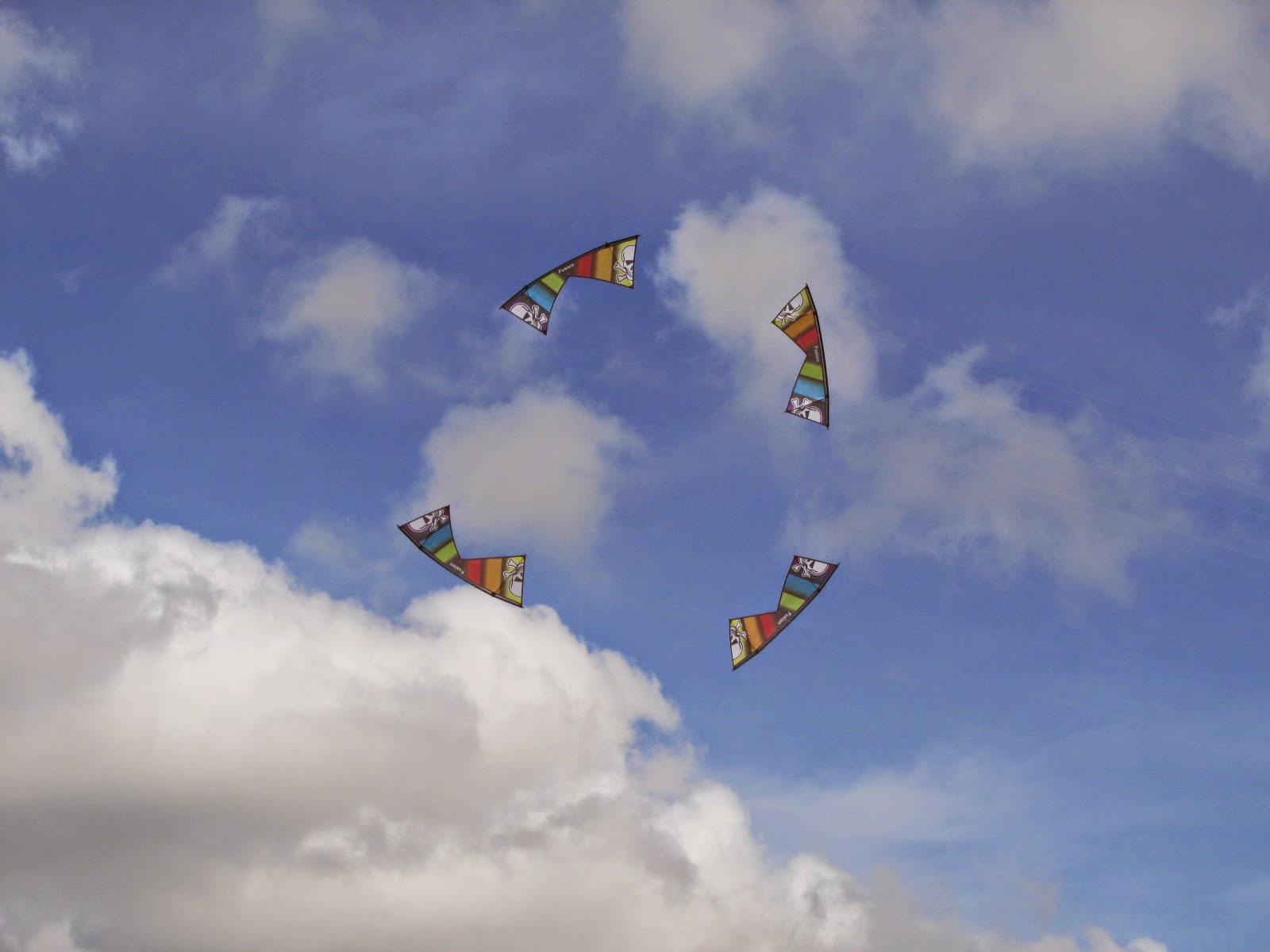 And, of course, if you have two or more Rev teams together at a festival, a Rev mega-team is unavoidable. The Decorators and Fusion duly obeyed this law of nature! 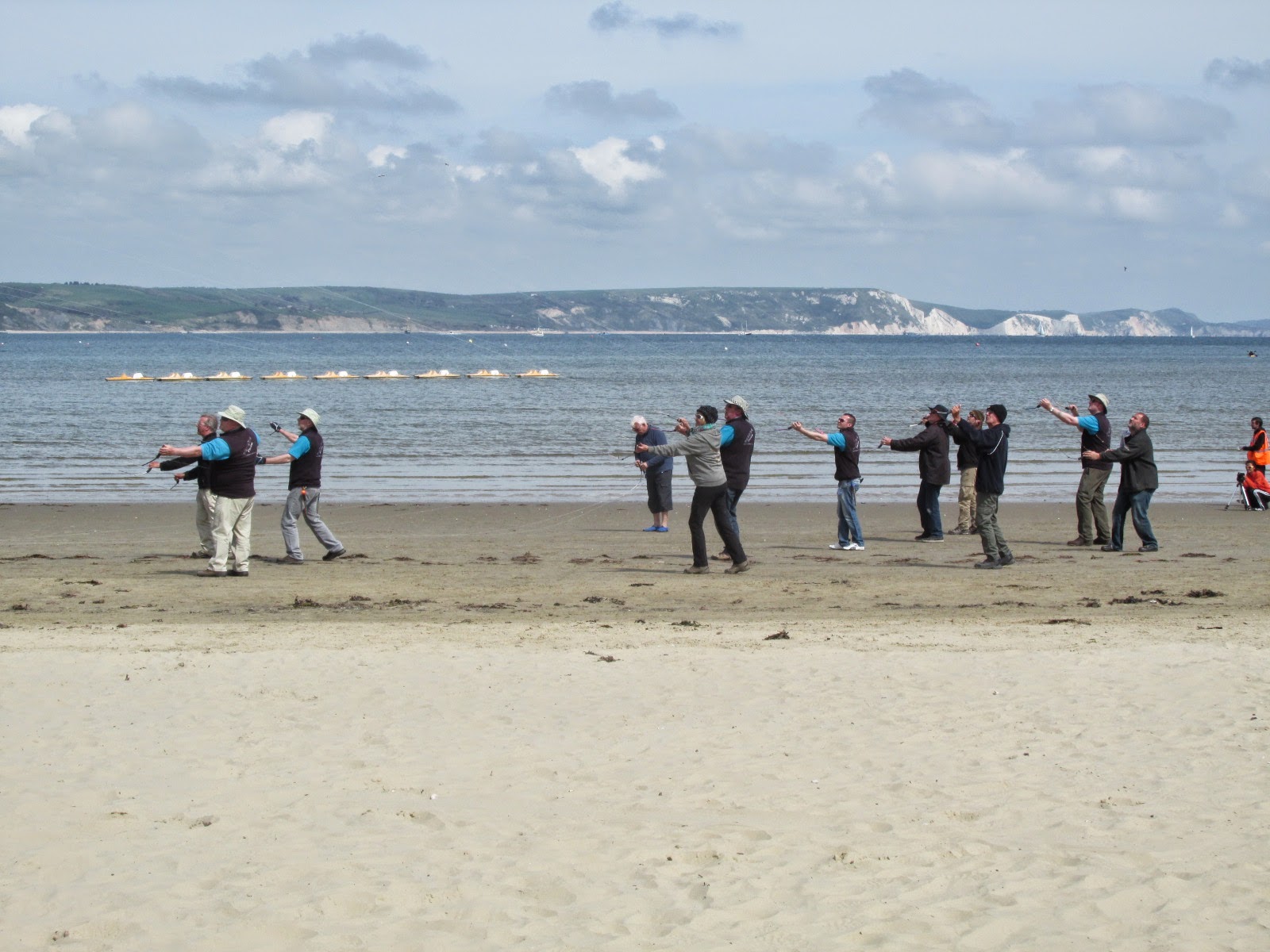 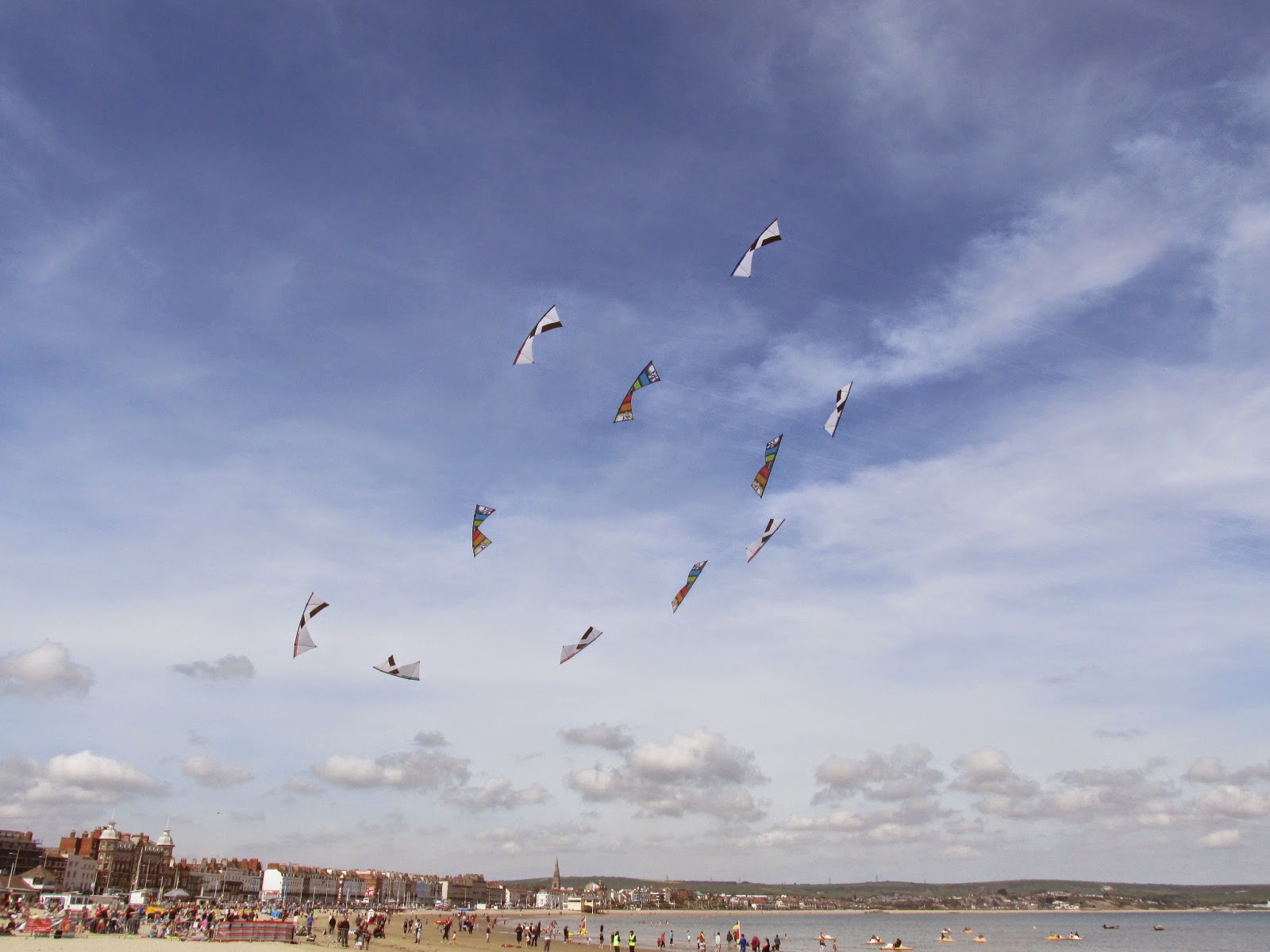 With the Rev-flyers going mega-team, the dual-line flyers couldn't stay behind, and it's also unimaginable to have Barry Savell of Flame present at a festival, and then not have a dual-line mega-team. Flame teamed up with Airheads, and seemed happy to let us join them. 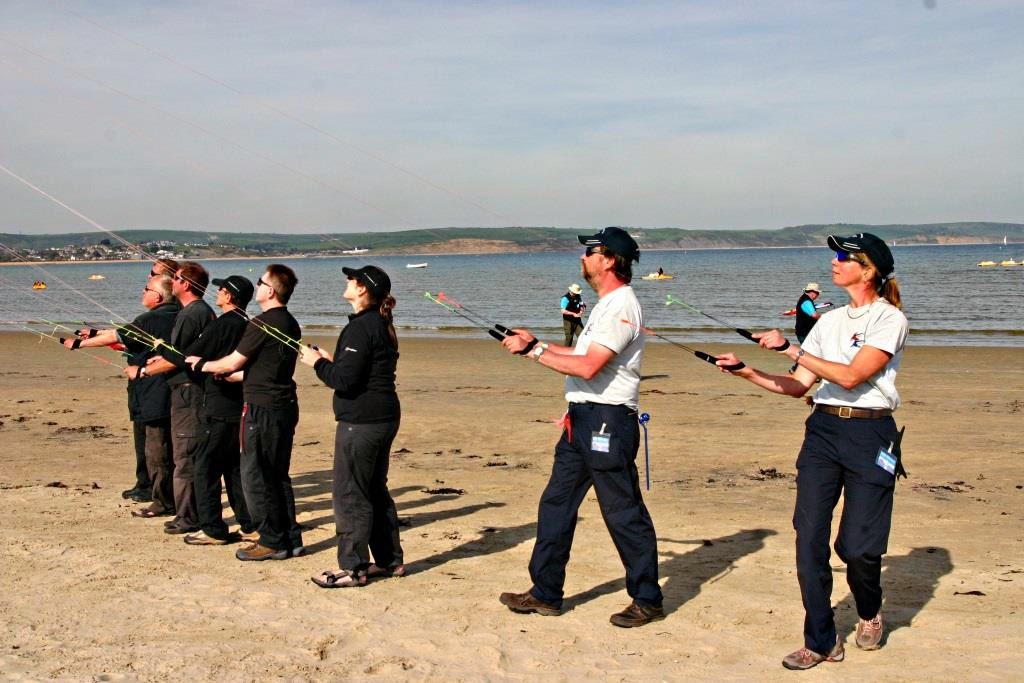 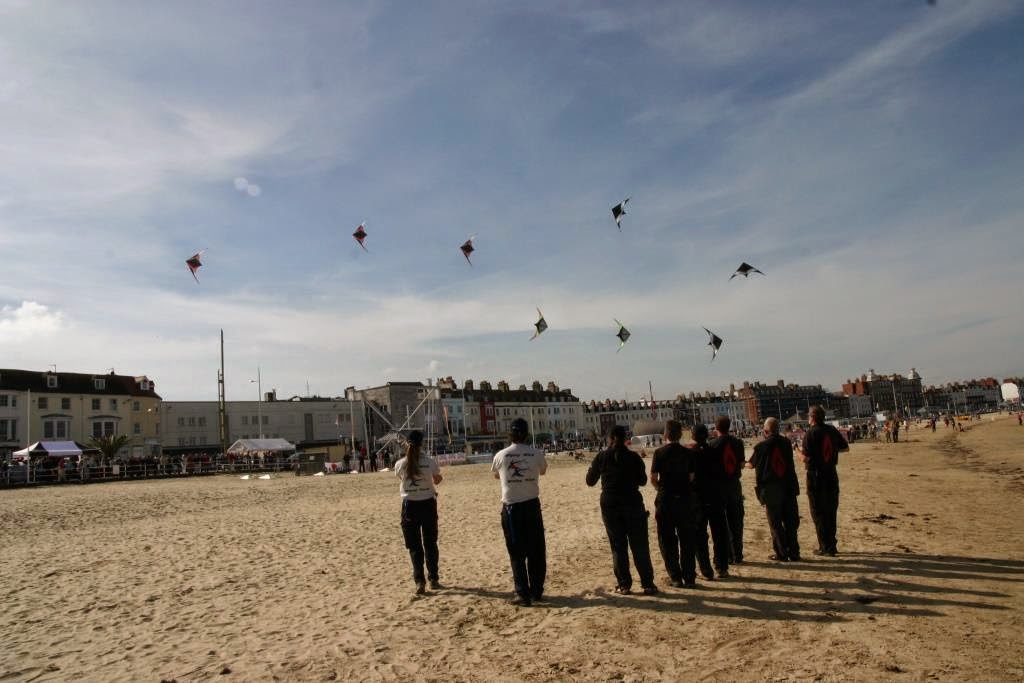 A video of the first three minutes of our Sunday mega-team popped up on youtube:


As always, the focus of this blog is on pair- and team-flying but lots more happened, and photos can be found here (for instance, Paul Thody was again present, flying his stack of 24 Flexifoils). I do want to pick out one person appearing at the festival and that is Peter Powell. Without him, who knows what the kiting world would have looked like, and I was lucky to be able to have a brief chat with him. As you may know Peter Powell kites are back on the market again. We tried to fly our customised Peter Powell Mk III kites, but the wind was too light for them. The Powell boys are developing an UL version, with a carbon frame, and flew a prototype. 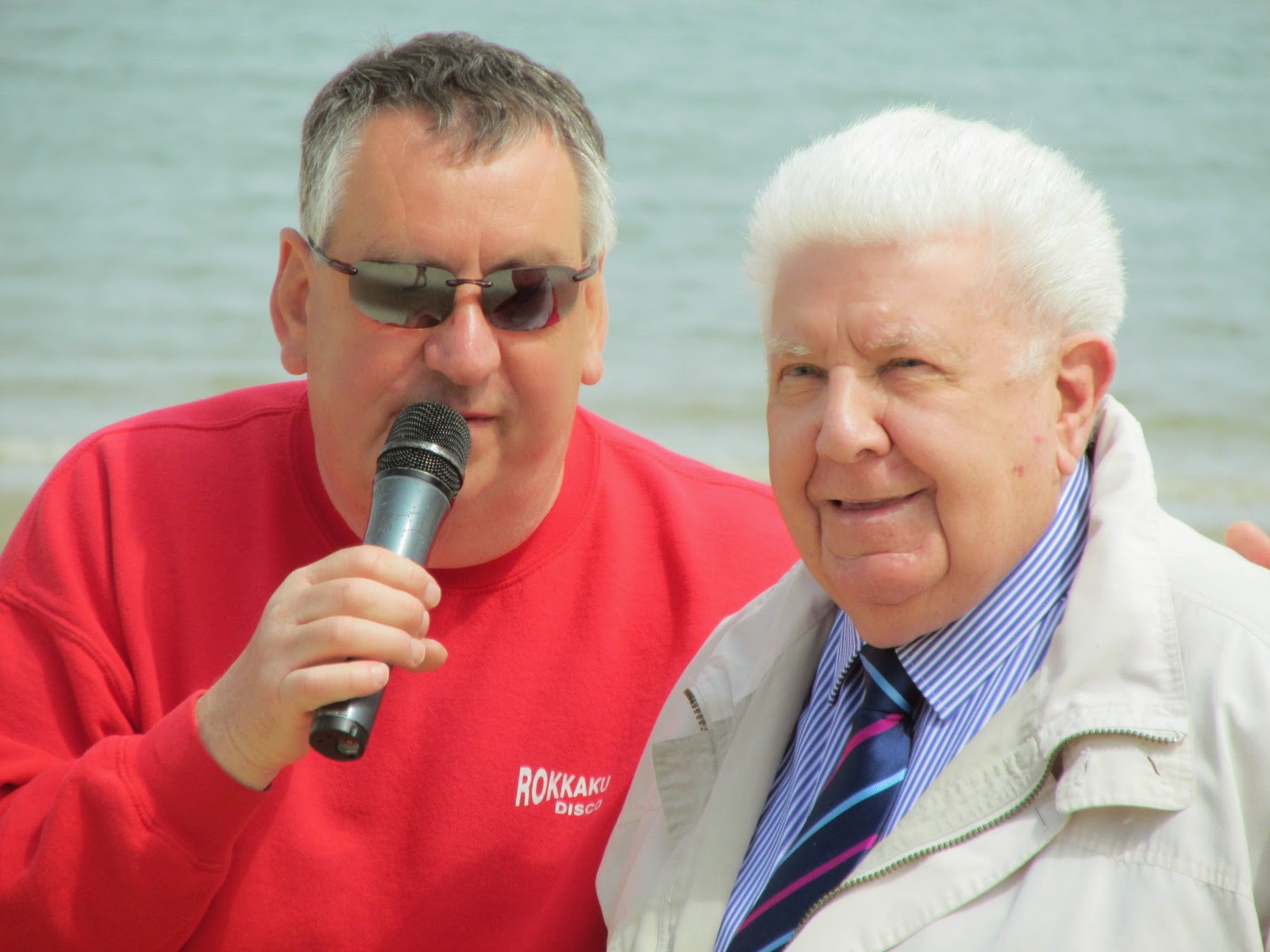 Back home, still buzzing from a great festival, the last task was to hose off the kites, because the fine powdery Weymouth sand gets everywhere ... 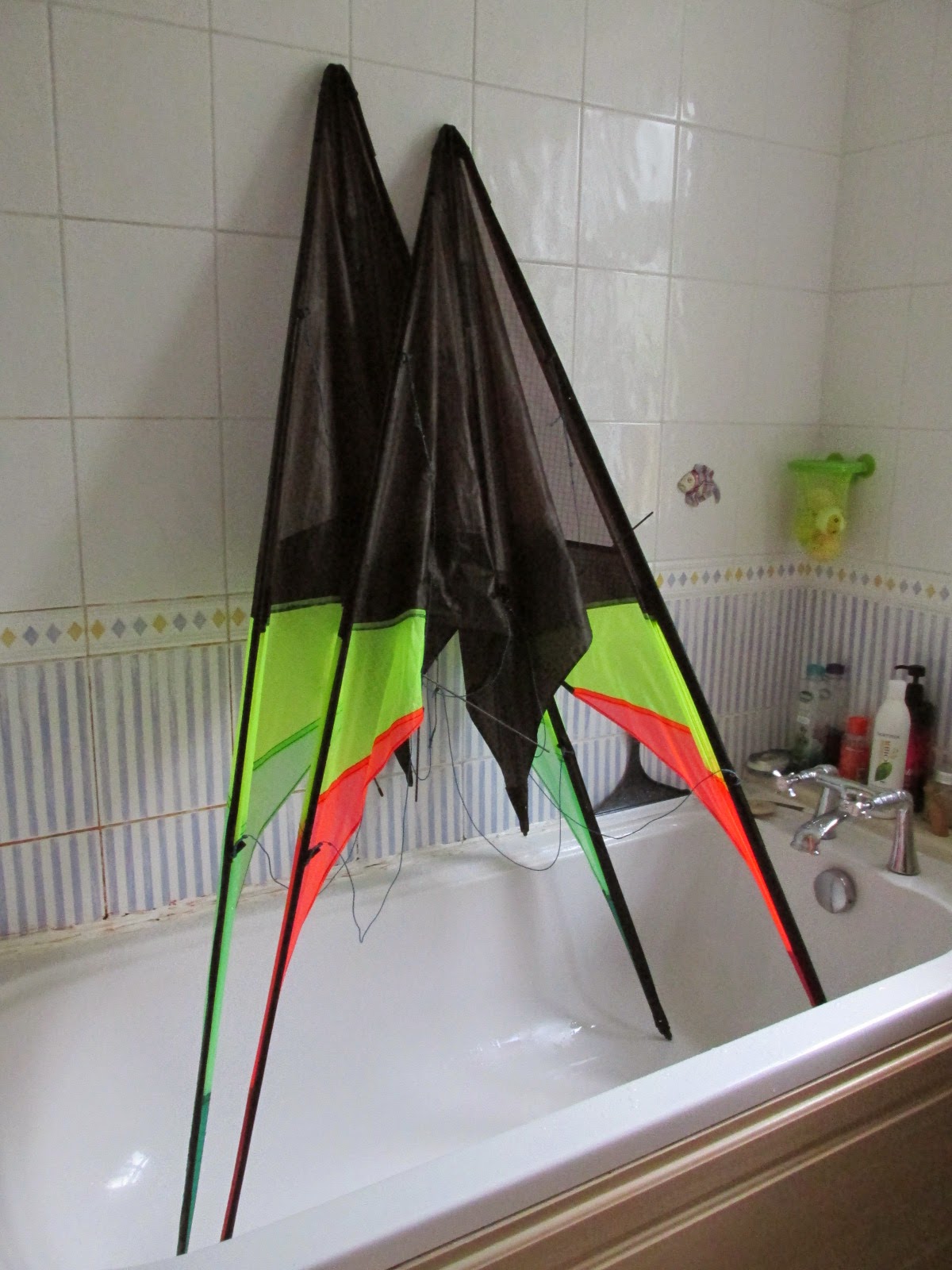 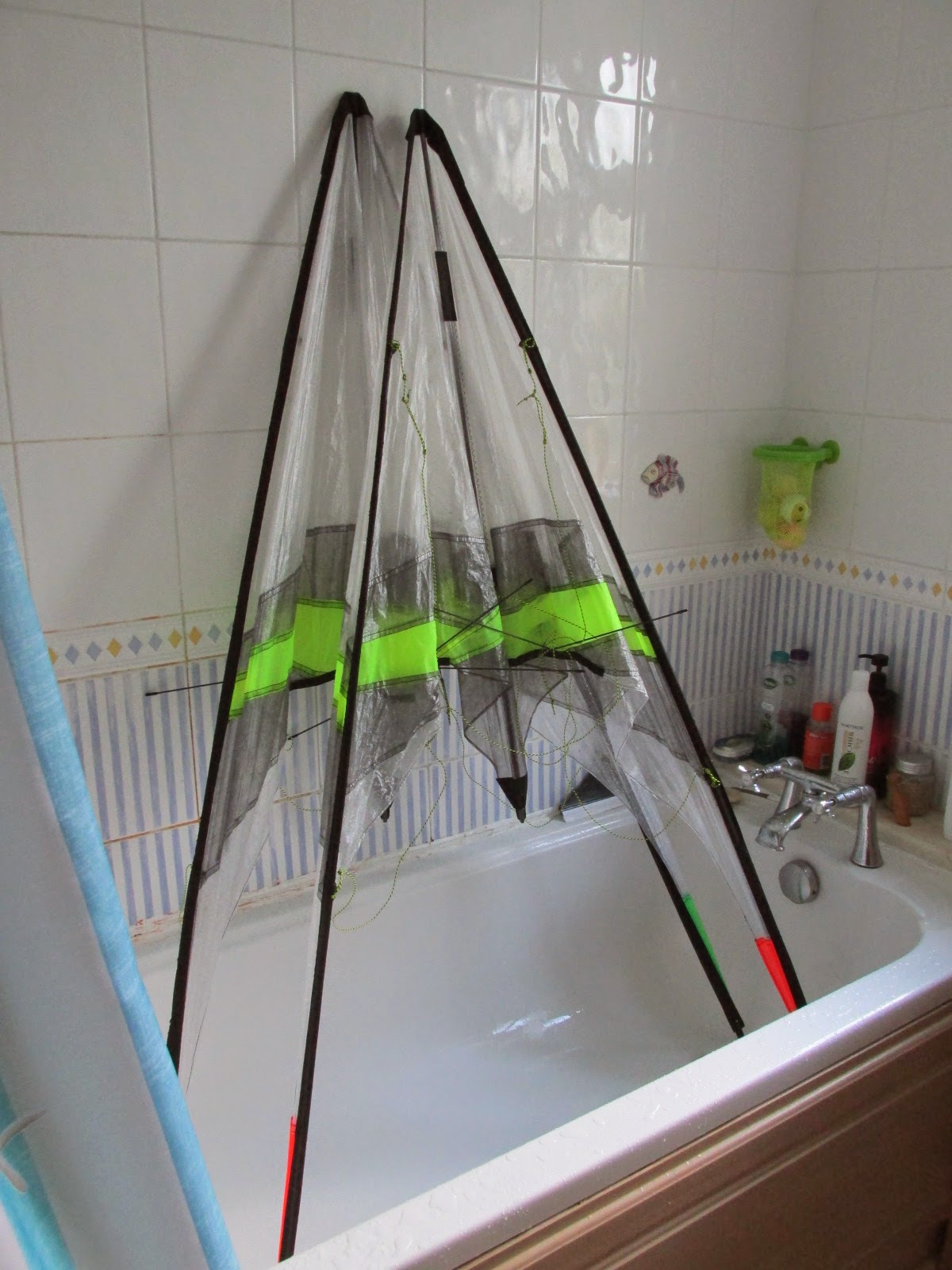 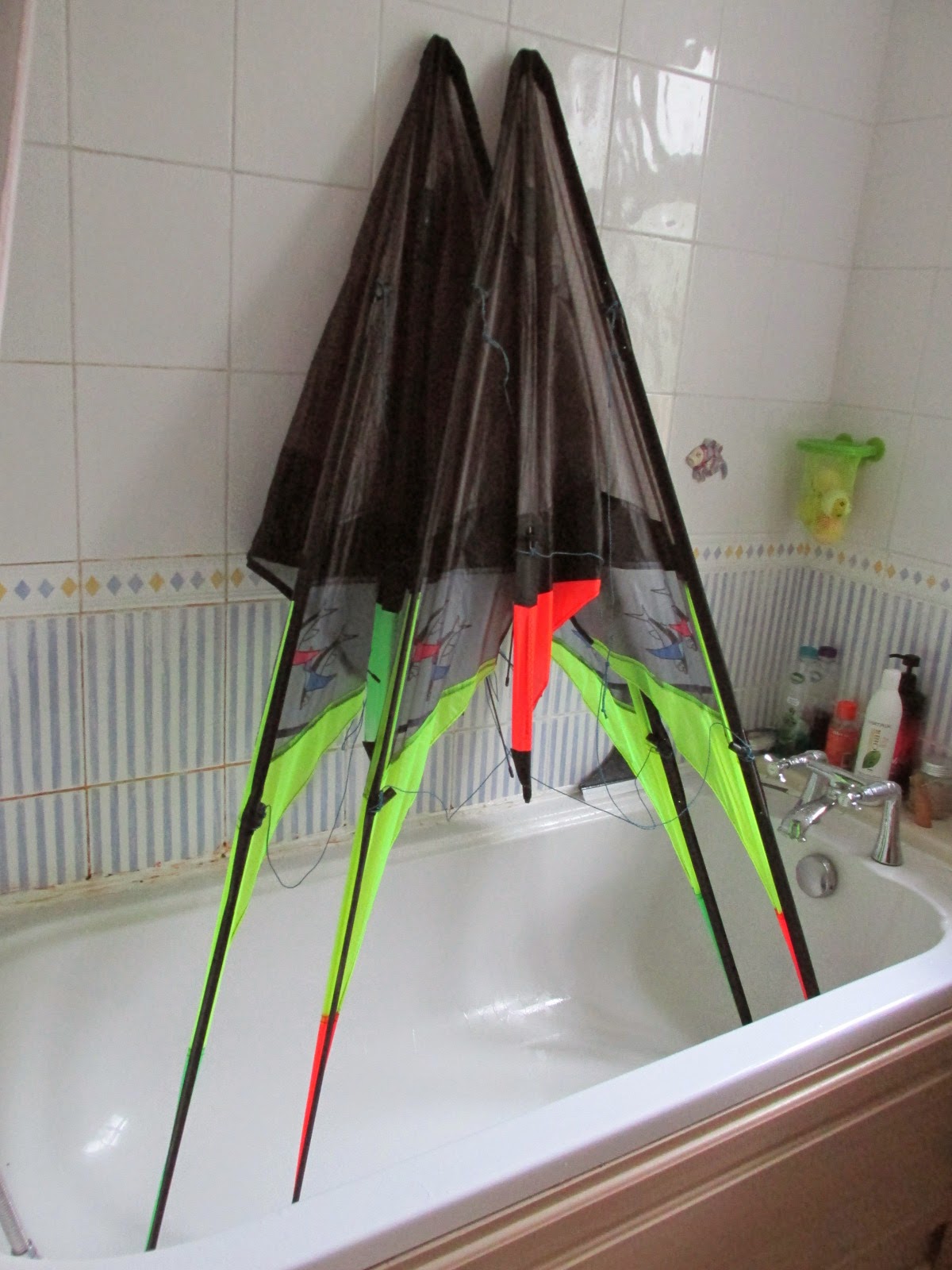 Credits for the pictures showing us flying: Roger Backhouse