At Southampton Kite Festival, Keith Griffiths mentioned STACK planning a Fun Flying day or weekend, focused on pair- and team-flying, sometime later in the year. This took place yesterday at the Jolly-Up site near Cliddesden, and available for coaching was the full line-up of Team Flame. In total, nine people showed up (Team Flame, Flying Fish, and Peter, Luke, Peter and John). 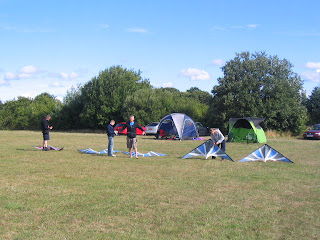 The wind was coming and going, so we kept switching back and forth between flying North Shore Radicals and North Shore Konas, while the Team Flame guys mostly flew light and standard Furys (Furies?). 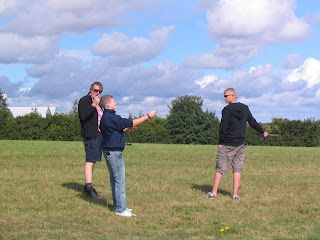 Day started off with flying basic patterns in teams of 3 and 4, supported by coaching from Barry, Fran and Tony. And then it was time for some serious fun ... 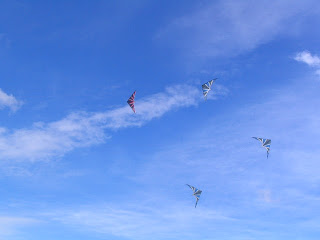 Fran started explaining a 5-kite move, which he called the 'Japanese move' or the 'Air-Rex manoeuvre' (as the Japanese Air-Rex team appears to have been the first team to fly this pattern). When he suggested to try and fly it, I thought "yeah, right ...". Difficult to explain on paper, but the key part of the move is one kite snap-stalling in the centre of the wind window, while 4 kites star-burst away from it, then race back, and snap-stall as well in a tight box pattern around the first (and still) stalled kite. And it worked after some practice! Then we moved on to a much more daring 6-kite manoeuvre, which basically involved a large and a small triangle of kites moving through each other. And 6 kites then became 7, as Barry decided to add another kite to the fun. We did pull off both the 6- and the 7-kite manoeuvre in the end, but not without having to sort out several major line tangles. And sorry for not having any pictures of those patterns, but watching your own kite, the kites you need to maintain position with, and the kites you need to avoid crashing into leaves little opportunity to also take pictures ...

Barry, Fran, Tony: thanks a lot for giving up your day. We were really knackered at the end, but we look forward to the next one! 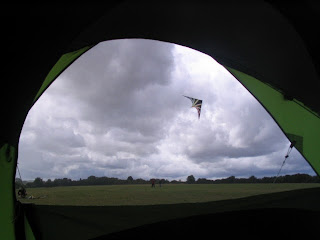 Oh, and one more thing: after having tried out our new Quechua tent at Portsmouth and Bristol, and now again at this Fun Flying day, I can say it's a really good buy. Plenty of room for storing our stuff, and getting kites out of bags, and also a good shelter when it rains and you want to watch others fly in the rain, while staying dry yourself (;o). And we're getting much better at folding it up again at the end of the day!
Posted by flyingfish at 18:45