A Dazzle of Dragonflies

Every once in a while, you stumble across a kite you just ... have ... to ... have. To me, this happened quite recently when visiting my fellow kite-blogger Marcy Marchello's Free Spirit Kite Review. On her blog, she has a link to mini dragonfly kites, hand-made by Tom Tinney. The kites are made from metallic mylar (blue, red, green, or gold), cellophane and heat-bent mono-filament spars, with a long tail of tissue paper, and have a wing span of just 10cm. Can you fall in love with a kite? Have ... to ... have!! Contact with Tom was established, money was paypal-ed westwards, and a set of four mini dragonfly kites, one of each colour, flew eastwards across the Atlantic soon after.

So here I'm proudly showing off the latest additions to our kite quiver: four gorgeous little jewels, our Dazzle of Dragonflies! They come R2F, each with their own mono-filament line already attached and on a little winder, and in a special plastic box. 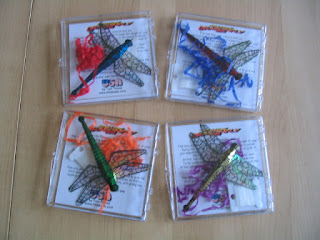 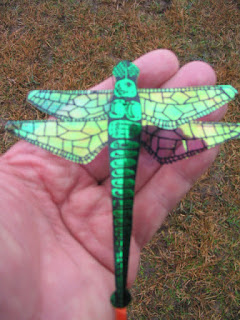 During their maiden flight, the wind was quite light, 2-6mph mostly, and they fly really well! Pretty stable when the wind is smooth, but swooping, darting and diving in response to even the slightest turbulence. Probably no surprise, given that they weigh 0.3 gram .... Their flight really resembles that of a live dragonfly. And very little pull (;o). It was quite dark and grey when we flew them first, but I can imagine they'll really sparkle when the sun is out.

Taking pictures of them flying was far from easy due to their swooping and darting, but here are two of the best ones (several pictures merely showed a tail or a wing tip!): 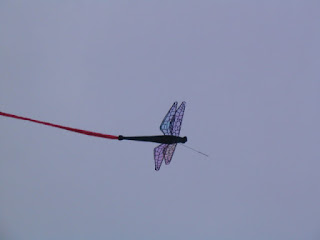 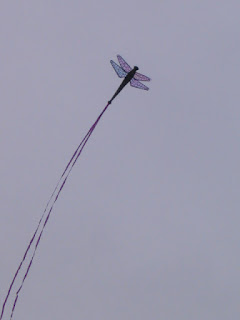 And here's a brief video, giving you a bit of a feel for how they fly:


In the second part of the video, the 'loops' you see were basically done on demand: when I released the line and then gave it a short sharp tug, the dragonfly looped, again and again.

Tom, hat off to you for making such beautiful little kites, and Marcy, thanks for alerting me to them!
Posted by flyingfish at 14:13