It isn't very often that a top kite builder announces bringing a new kite on the market, and when this happens twice in so many months, it's definitely kiting news. I'm talking of Tim Benson, who enriched the kiting world with kites such as the Phantom, Gemini and Deep Space. My own kite quiver has six of Tim's kites: a Deep Space, a Gemini UL, an Inner Space, a Matchbox, a Swallowtail, and an Airbow. Guess I must like Benson-made kites!

Both new Benson kites were first announced on Tim's Facebook page, and subsequently on his official web-site (Tuesday, after lunch).

First announcement was of a vented version of the Deep Space. 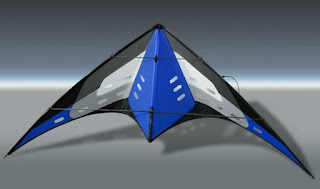 This kite was developed by Adrian Atherton, and I met him several times at Stokes Bay and other flying fields, putting prototypes through their paces. I haven't flown the kite myself yet, and look forward to doing that when I have the opportunity. Early reports are very positive (but who expected anything else from a Benson kite?).

And then there was the eagerly-anticipated official announcement that Chris Goff's SuperFly would now be part of the Benson stable. Chris had told me about this new development last summer, but had asked me to keep quiet for now (I'm sure many others were also unofficially aware this was on the cards). 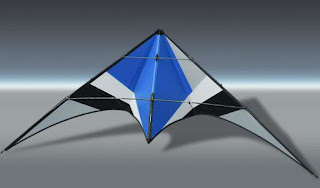 I do have my own Chris-built SuperFly, and already blogged about it here and here. Since these two posts, I've of course flown the kite more, and I can only say one thing: I really click with the kite. Chris' kite-designing ability coupled with Tim's kite-building ability should ensure the SuperFly becomes an iconic kite.

I think I've made pretty clear that I have great respect for Tim as a kite-builder, but, given that I have six Benson kites already, I'm secretly (ok, not so secretly) pleased that my SuperFly is an 'original Goff' (with a signature to prove it!).