Cast your mind back to 1987, East Coast Stunt Kite Championship at Wildwood, innovative category. Ron Reich enters the arena wearing a strange-looking belt while his ground crew carries two kites into the arena. As far as I'm aware, this was the first time one person flew two kites competitively. Ron flew a custom-made pair of Spin-Off kites, one mostly blue with Superman graphics, the other grey and pink, depicting Lois Lane. Music of the routine was the 'Love Theme' from the Superman movie.


Fast forward almost 30 years. The sails of these Superman and Lois Lane  Spin-Offs appeared on eBay, and were snapped up by an American kite flyer who was aware of their historical significance. He wanted to make sure these sails remained within the kite-flying community. He set out to re-frame and re-bridle them, and asked for advice on the Gone with the Wind forum, where he also posted some pictures of the kites. I expressed an interest in the kites, and to make a not very long story even shorter, soon afterwards the two kites flew across the Atlantic towards me.

So here are these unique historical kites, on the ground and in the air in the UK! 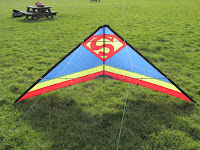 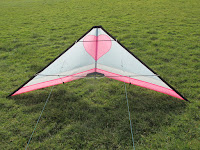 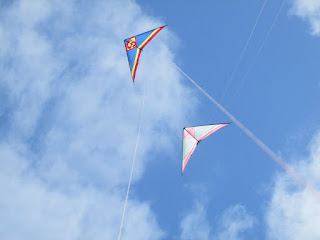 Besides being excited about flying kites with such a heritage, and honoured to be trusted as the custodians of these kites, I wanted to add a little extra to flying them. One obvious extra would be to give Superman a cape! Following a suggestion from Ca Ike on the Gone with the Wind forum, I got myself two lengths of organza, one red (for Superman) and one white (for Lois). Two questions: does it look good on the kites, and does it interfere with their flying? 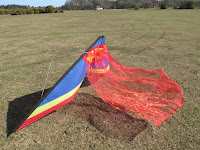 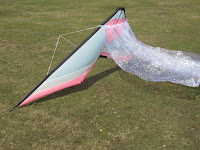 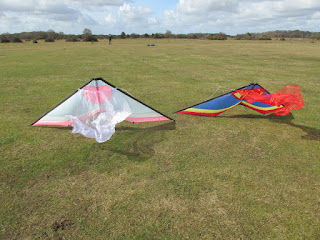 Answer to the second question was a clear 'no'; the organza is so light it hardly creates any drag. And you be the judge as to the answer to the first question ... 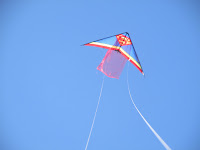 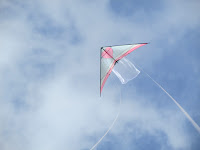 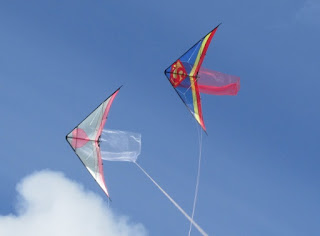 Obviously, when we fly them at official events, we have to maintain the tradition of flying them to the 'Love Theme from Superman', and I picked Shirley Bassey version for this.


Hopefully coming to a festival near you soon!
Posted by flyingfish at 15:06